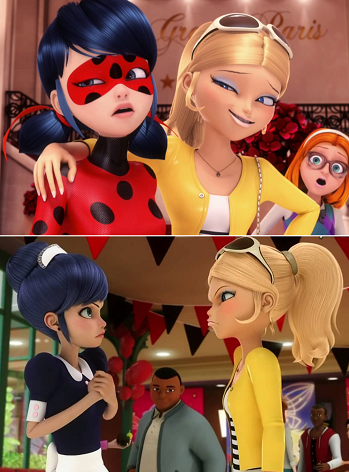 Marinette and Chloe keep buggin' each other.
Every Superhero must have a Secret Identity. The reasons are incredibly varied, but they have one.
Advertisement:

This is often played for comedy when a Superhuman encounters someone they know in their Secret Identity and reacts according to how that person treats them in their downtime, usually with a Snub.

It is usually a case of an Alpha Bitch or Jerk Jock doing what they do best, being mean to someone just because they don't like them. Not realizing that the person they are actively victimizing is actually their favorite Superhuman and that there will be karmic payback for what they give out later. Sitcom Archnemesis can also play into this role.

Sometimes the subject may not have superpowers, they may just be famous and have fabricated their more well-known persona so that they can live an ordinary average life when not in the public view.

When played for drama, the superhero might actually be in genuine danger from a villain who hates them in their civilian guise, but indifferent to the cape, though in such cases overlap will likely occur when they either figure it out or simply get tired of the hero interfering with stuff that is none of their business.