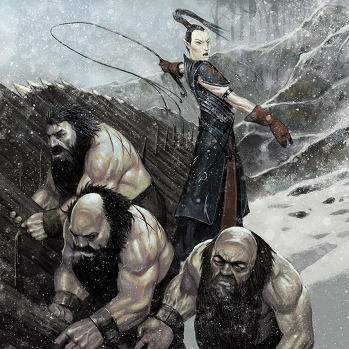 They'd say "Screw You, Elves!", but that would just double the lashes.
"We recognize the negro as God and God's Book and God's Laws, in nature, tell us to recognize him. Our inferior, fitted expressly for servitude."
— Senator Jefferson Davis (D-MS) and later Confederate President
Advertisement:

Unlike Servant Race, these people were once independent, but have been conquered and made into servants. Scattered resistance movements usually exist.

Note that a race is a "slave race" from the point of view of the "owners" only, and it might have worked perfectly well on their own, their free population even outnumbering by far the ones that are held captive. Some slave-holder races will limit themselves to only one of these (and even maintain a friendly disposition towards everyone else), but habitual slave-holders might view everyone who is different from them as this. The slaves can often be found serving the self-proclaimed Master Race. Some might suffer of being Not Used to Freedom.

This of course has some uncomfortable Real Life examples. Note, however, that for the majority of history, slavery was not directly linked to race; beware of Eagleland Osmosis. Historically, most people got to be slaves by running into debt, getting convicted of a crime or taken captive in war, then they'd be sold to raise cash or brought home with their captors as loot. Desperate people at times even sold themselves as slaves to have support at least. Slaves could therefore be any ethnicity, including that of their master, and prior to capture, they might be any social class ranging from peasant to king (the latter would be more probable to get ransomed sometimes of course).

If the slave race has superpowers of some sort, this crosses over with Superhuman Trafficking. If they're given high tech weapons to fight with, it's Low Culture, High Tech (or if a low tech race enslaves a Proud Scholar Race for their tech). Their descendants would often be Sons of Slaves after the Slave Liberation.