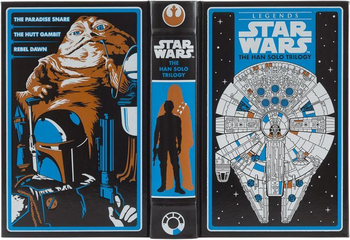 The Han Solo Trilogy is a trilogy of Star Wars Legends novels written by A. C. Crispin. The three books are:

As the title might suggest, the stories focus on Han Solo, and specifically on his adventures in the ten or so years leading up to A New Hope, as he goes from Street Urchin and petty thief, to Imperial pilot, to the Loveable Rogue we all know and love. Along the way, he gathers friends and allies both new and familiar; Chewbacca, Lando Calrissian, and the Millennium Falcon all appear for the first time in The Hutt Gambit, for example, and Han doesn't acquire the Falcon until Rebel Dawn.

Confusingly, this is the second trilogy of books to focus on Han Solo's early life. Nearly twenty years earlier, Brian Daley wrote The Han Solo Adventures, three stand-alone stories about Han's escapades as a smuggler. Crispin retroactively fitted Daley's books into her series so that they now canonically take place during three chapters in the middle of Rebel Dawn. So the chronology goes:

Advertisement:
The Paradise Snare → The Hutt Gambit → The beginning of Rebel Dawn → The Han Solo Adventures → The rest of Rebel Dawn.

Similarly, Crispin set The Lando Calrissian Adventures during and after The Hutt Gambit; Han meets Lando just before those stories begin.