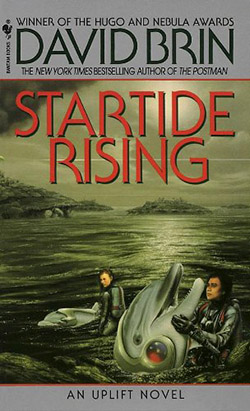 The Uplift Series is a science-fiction series created by author David Brin. Several centuries into the future, humanity has matured as a species, cleaned up the Earth, more-or-less achieved world peace, and even used genetic engineering to bestow sapience on chimpanzees and bottlenose dolphins. However, Earthlings make contact with an intergalactic, multi-species alien civilization, and find out that they're extremely primitive by "Galactic" standards. Every other spacefaring species got where it is by being "uplifted" by a patron race, and were handed amazingly advanced technology on a silver platter. Many species consider humanity's belief that they evolved sapience without genetic engineering to be a blasphemy worthy of extinction or enslavement.
Advertisement:

The Uplift Universe consists of six novels, a novella, a short story, a GURPS supplement, and a Universe Compendium.

The first series of novels is usually just called the Uplift Trilogy, but is not, strictly speaking, a trilogy. It consists of:

The second three novels are called the Uplift Storm Trilogy. It takes place about two years after The Uplift War, and introduces the planet Jijo, illegally settled by several species, including humans. It is an actual trilogy. It consists of: