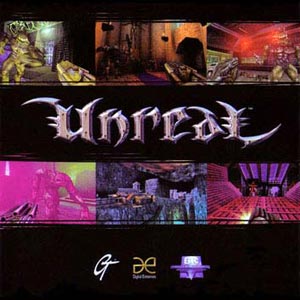 The game that started it all.
Advertisement:

Unreal is a First-Person Shooter made by Epic Games and Digital Extremes and released in 1998. It's the first game in the Unreal series.

You are Prisoner 849, being transferred to a prison moon on a starship called the Vortex Rikers. The ship goes off-route and crashes on the uncharted planet of Na Pali. As you escape the wrecked vessel and start taking in your surroundings it soon appears that the planet is inhabited by the Nali, a peaceful race of four-armed humanoids with a distinctly agricultural way of life. Not all is well on Na Pali, though, as the cruel and technologically advanced Skaarj race is invading the planet, pillaging its resources and busily slaughtering Nali left and right.

Your actions from this moment are governed by the simple desire to survive, which isn't going to be easy when the Skaarj have declared war against everything that isn't another Skaarj. During your attempts to avoid dying horribly you'll come across helpful Nali who think of you as their messiah, alien biology both neutral and hostile, mysterious Lost Technology - and quite a lot of instruments of death to fight your personal one-man war against the entire Skaarj race. One way or another, the path to freedom will be flowing with alien blood.

Unreal stuck out from a lot of other FPS games at the time by being less of a total shootfest (think Quake) and more like an adventure game. It achieved this by focusing the gameplay on fighting for survival rather than for the kill score and by making fights more like duels than fragfests, as you fight a smaller number of tough enemies that each provide a challenge rather than crowds of weak monsters that only have numbers on their side. The levels give the player significant freedom (for the standards of the time - open-world games not being quite as widespread as they are today) and reward exploration with tidbits of backstory about the planet and the various races on it.

It saw a lot of critical acclaim and absolutely raving reviews, but it somewhat suffered from the release of Half-Life a few months later. Then a year later Unreal Tournament came out and did multiplayer so much better as to effectively make Unreal singleplayer-only, which hurt the latter's long-term appeal in the market.

There's an Expansion Pack for the game, called Unreal: Return to Na Pali, developed by Legend Entertainment using original content as well as levels and enemies which were left out from the main game, which starts right after the events of the original game. You are recruited by the UMS, who gives you more equipment in order to go back to Na Pali and find a crashed ship. Three weapons are added (two of which mostly redundant) as well as several monsters. The Expansion's length, while containing half of the main game's levels, is more or less the same as the main game, while the main character is slightly more fleshed-out by having them speak in Intermission cutscenes.

As Epic Games decided to focus on the Tournament side of the franchise, the rights for the inevitable sequel were given to the aforementioned Legend. While not a bad game in and of itself, Unreal II: The Awakening was hurt by being the sequel to one of the most revolutionary games ever in a market that had since become much harder to revolutionize. That, plus various gameplay changes from the original, caused it to pass mostly unnoticed by those who didn't know the series and disappoint those who did, with many reviewers giving it average to low scores.

community. In December 26, 2007, the first community patch, for version 227a, was released. The patch supports both original Unreal and Unreal Gold as well as improving support for Linux and Mac, updating the renderers, adding many new features for server administration and tweaking, fixing long-standing bugs and even adding its own content in the form of three new Harder Than Hard difficulty levels and four new Deathmatch maps showcasing new tools for mappers such as Staticmeshes and Particles as well as the restored QuadShot weapon as well as adding Unreal Beta content such as the Translocator. The last community patch released by OldUnreal belogs to version 227j, and was released on June 23, 2022, after nearly 10 years under development.

Ultimately, Unreal's greatest merit is perhaps more in what it spawned than in what it was; the engine was so advanced and efficient that many developers ended up licensing it for their own productions, and Epic decided to continue development of the engine separately from the Unreal series itself. Since then it has evolved through four generations, powered hundreds of games from independent titles to huge triple-A ones, been adapted to genres wildly different than the one it was born to run (including RPGs, racers and simulators) and ported to every modern gaming platform under the sun (including HTML5 browsers). It eventually achieved such resounding success that Epic decided to release it for free to everyone and only profit from a small royalty, which simplified development enormously for independent studios. It's no exaggeration to say that it revolutionized gaming development on the whole.