Earth Is the Center of the Universe 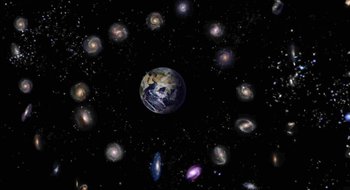 Not Drawn to Scale
"Why Earth of all places? It would have been nice if it decided to hibernate on Neptune or something."
— Kyon, The Melancholy of Haruhi Suzumiya
Advertisement:

Earth is a Weirdness Magnet for cosmically significant events.

Ancient interstellar evil sealed away? It's sealed on Earth.

Some alien or another, whether it's one ship or its entire race, crash-lands, with no possible means of control for where they end up? Earth. (More specifically, either Central Park or the Budokan.)

If against all odds, it's just next on the list for an alien menace that has conquered hundreds of worlds before it, Earth will more often than not be that elusive last planet they needed to make their conquest of the region/galaxy/universe complete. And almost every time, it's Earth where resistance to the aliens' evil ways will finally succeed, no matter how improbable.

Obviously, in a particularly extreme form of Creator Provincialism, it's easier for Earthling writers to come up with sympathetic characters and situations when they're on the same planet as the viewers. But when a series has hundreds of worlds to choose from, it's amazing how often they go back to the same one.

It could be that the reason we don't hear about the invasions of other planets is that we weren't there, and we don't know about the baddies till they visit us. If that's the case, though, the universe must be teeming with ancient evils, reviving marauder races, and professional invaders to the point where it's amazing any peaceful race has survived for more than five minutes.

On the other hand, maybe it's because Humans Are Special.

Of course, maybe Science Fiction shows really do show aliens invading the planet Zog just as often as they do Earth. It's just that those shows are only aired on the planet Zog, where Earth is just one of the countless Insignificant Little Blue Planets.

Sub-tropes are, of course, Tokyo Is the Center of the Universe and Big Applesauce. For subversions and aversions, see Insignificant Little Blue Planet and Earth That Was. For nation- or region-specific examples, see Creator Provincialism. See also The Exact Center of Everything.

Alternative Title(s): Earth Is The Centre Of The Universe