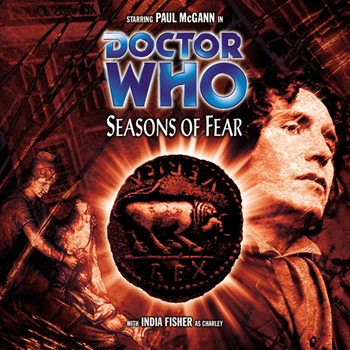 It's a great chase through time to thwart more dreams of conquest!
Advertisement:

He finally takes Charley to her romantic rooftop rendezvous: Singapore, New Years' Eve 1930. While she's off partying with her date, Alexander Grayle, the Doctor meets a man who hates him — Sebastian Grayle. This rather conceited man claims to have killed the Doctor in his own personal future. He also informs the Doctor that they're currently in an alternate timeline, and that the Time Lords have long since been replaced in this timeline by a much more powerful race.

The Doctor manages to get the TARDIS out of the alternate timeline with relatively little effort, and deduces that Charley's date is Sebastian Grayle's relative. With a Grayle tissue sample extracted from her mouth, they set out to track down Sebastian Grayle through history. For once, they actually plan ahead, and after three weeks of research, they end up in Roman Britain. Grayle, an aspiring priest of Mithras

, makes first contact with his masters, and disrupts a ceremony celebrating the legendary slaying of the bull. The Doctor decides he's got a licence to meddle with time today (what with the alternate timeline and all) and evacuates the temple with the help of a friendly British Roman priest named Lucillius. Charley steals an iron holy sword from the temple and takes it along. (Also, there's a Dalek, but that's not important just yet.)

Charley wonders whether the Doctor thwarting Grayle's plans is what will cause him to kill the Doctor in the first place. The Doctor tells her not to think about it too hard, because her brain would turn into a spiral staircase and she'd get lost trying to climb it, then tells Charley an old Gallifreyan nursery rhyme...

Zagreus sits inside your head,
Zagreus lives among the dead,
Zagreus sees you in your bed,
And eats you when you're sleeping.

Grayle's next contact with his masters is set during Edward the Confessor's reign, albeit an Alternate History version. Grayle has taken The Slow Path and is not pleased to see the Doctor. Neither is the very clever political genius Edith Swan-Neck (quite happily playing The Beard to her friend Edward in this timeline), who it turns out was once engaged to the Doctor before he hastily ran away and left her at the altar. Edward, however, turns out be the Doctor's close friend, and they stop Grayle's plans (involving shiploads of plutonium) in this era using the holy temple sword.

Their third stop is with a conman in Regency England, posing as Richard Martin, and his supposed daughter Lucy. Their con mark Grayle — Lucy's fiancee — is now several times older than the Doctor. When confronted, Grayle kills "Richard" and tries to sacrifice Lucy to his masters, and opens up a time portal which spits out a giant metallic egg. The Doctor finally puts all the pieces together. Bulls, horned artifacts, one loyal follower, human sacrifice... it's the Nimons!

Retreating into the TARDIS, the Doctor makes a fake Heroic Sacrifice and lets himself and the aliens get sucked into the time vortex without protection. He's able to steer them to Roman Britain, where he falls out of the sky in front of his friend Lucillius... about an hour before he'll have met Lucillius the first time around. The Doctor pretends to be a messenger of Mithras, and Lucillius mobilises an army to kill all the aliens using the iron temple sword. The Doctor, meanwhile, hastily visits Grayle, moments before Grayle pledges his life to his masters, and convinces him (with the help of some of future Grayle's gold) to lead a virtuous life instead. When future Grayle barges in on them (thanks to the TARDIS' fast return switch), original Grayle is horrified to see what he'll become, and murders his future self.

The timeline restores itself as best as it can, Lucy is taken home, "Richard" is alive again, and all's well that ends well, except a being with Charley's appearance shows up and eats Lucy and "Richard".

As for all those continuity errors...