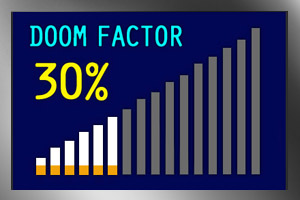 The inevitable problem with making everything you do into a Big Event is hitting a plateau of excessiveness. This is done to maintain a sense of urgency or, more likely, shock value via Plot Leveling.

The problem occurs when the super-weapons have to go from killing thousands to millions to billions. Or the crazy villain hits the artistic plateau of sin and, from then on, just becomes a mass murderer. There's also the good chance the writers will use the opportunity to pick some Throw-Away Country to be the place where millions die, but that number is so huge that it becomes almost impossible to relate to, and the heroes' reactions just don't seem like enough. This runs counter to the superheroing idea that any number of people getting hurt is wrong; this makes the main characters seem ineffectual and induces apathy in the readers.

This also creates a paradox in Comic-Book Time, where huge numbers of deaths have to start being overlooked to make any reaction credible.

The natural antidote to this is to use something other than people being killed to convince the audience of the importance of the story.

May also happen at the top end of the Sorting Algorithm of Evil. Leads to a condition where The World Is Always Doomed. Related to A Million Is a Statistic.