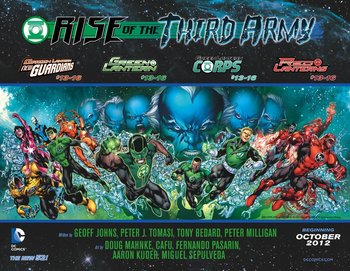 The first Bat Family Crossover for Green Lantern after the New 52, this story is a continuation of the plots already laid out by Geoff Johns. Unable to learn from their mistakes surrounding the Manhunters or their perceived mistakes with the Green Lantern Corps, the Guardians of the Universe decide that, rather than their own censorship policies and internal errors, the problems with the universe are due to The Evils of Free Will. After forcing Emotion Suppression on Ganthet, they decide to make their own viral army that they name their Third Army, after the Manhunters and the Corps, to spread order throughout the galaxy at the expense of free will.
Advertisement:

The outcome of this event leads directly into Wrath of the First Lantern, the concluding arc of Geoff Johns' run on Green Lantern.