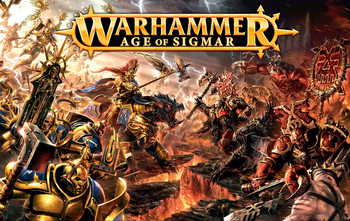 Mighty battles in an age of unending war!
"This night, we ride the storm!"
— Vandus Hammerhand, Lord-Celestant of the Hammers of Sigmar
Advertisement:

Warhammer: Age of Sigmar is a tabletop strategy game created by Games Workshop.

The game's setting is set after the events of Warhammer: The End Times, after the Forces of Chaos succeeded in destroying the Old World of Warhammer. Sigmar, last seen wrestling with the Lord of the End Times Archaon over his Warhammer Ghal Maraz, survived and rallied the remaining Incarnates of the Winds of Magic and Gods to create a new reality for their people — one free from the taint of Chaos. This reality is made up of nine realms, each representing the Winds of Magic. Sigmar lorded over all the realms from his own, the Realm of Azyr (Heavens), and all was peaceful... for a time. This was the Age of Myth.

The Forces of Chaos then invaded these realms, aided by the betrayal of the new god of death Nagash, forcing Sigmar to seal off his own realm and leaving the rest and its inhabitants to fend off the Chaos tide by themselves. This was the Age of Chaos.

As the Forces of Chaos ravaged the nine realms, Sigmar created the Stormcast Eternals, powerful warriors forged from magic, as his means of retaking the realms from the Chaos Forces, coming along with them is the Grand Alliance of Order: the armies of Aelves, Duardin, Man, Seraphon and Sylvaneth. This is the Age of Sigmar.