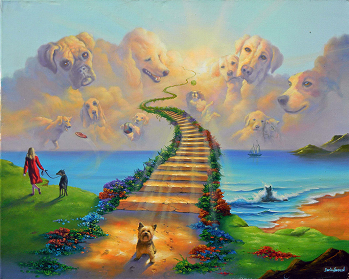 All dogs go to... Dog Heaven.
"If the worst came to worst, a heaven for mosquitoes and a hell for men could very conveniently be combined."
— C. S. Lewis, The Problem of Pain
Advertisement:

In a lot of stories, unless they operate on The Nothing After Death, deceased characters will end up in an afterlife. There's a lot of options with this; it could be Heaven and Hell, a Personalized Afterlife, or even just a Mundane Afterlife; some will have to greet The Ferry Man, while others may take a ride on the Afterlife Express. However, there seems to be a common theme to these afterlives, and that's the exclusion of other species.

There are many possible reasons for this. Maybe humans are the only species with souls who can ascend to Heaven (or descend to Hell) upon death, while other animals simply die. Maybe each afterlife is simply tailored to each species. Sometimes it's a case of regular humans and magical races, where the magical races have their own part of the afterlife contrasting the more mundane human afterlife. They may even share the same plane, and just be inhabiting different sections, while being able to cross through any of them.

Whatever the reason, these afterlives only serve one species. There might be a way to travel between afterlives, or they might be completely isolated from each other. The important thing is that a dead human will wake up in one afterlife, while their dead dog might end up in another, if the dog ascends at all.

Note that to fit this trope, these afterlives have to be confirmed or at least heavily implied to only serve one species. Simply not seeing any animals in a Heaven / Hell scene isn't sufficient, as they may simply be kept out for reasons of practicality or relevance, rather than any in-universe reason.

Contrast All Are Equal in Death. Sub-trope to Overly Specific Afterlife.

As this is a Death Trope, spoilers are unmarked.