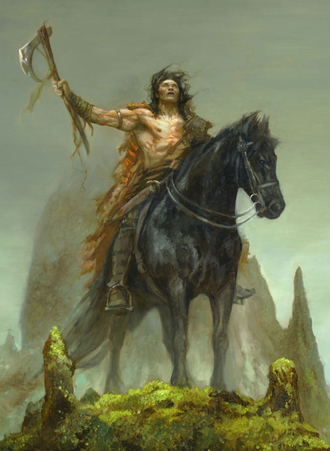 Kull is a character appearing in a series of short stories

by Robert E. Howard, the few of which published during his lifetime appeared in Weird Tales. Kull is a barbarian hailing from Atlantis, but was exiled from his homeland. After some years as an adventurer, Kull made himself king of Valusia in a bloody coup. He lived approximately 100,000 years ago (according to Kings of the Night).

Howard's more famous Conan the Barbarian inhabits the same continuity as Kull, but lives many thousand years later. Kull is a precursor of sorts of Conan; indeed, the first Conan story was a rewrite of a Kull story Howard had not sold. Both are fierce barbarian warriors, but Kull is a more thoughtful, philosophical character.

The Kull stories are a peripheral part of the Cthulhu Mythos. Perhaps most notably, Cthulhu fans will recognize the Serpent People who appear in The Shadow Kingdom.

Advertisement:
Kull stories written by Robert E. Howard
Few Kull stories were actually published in the lifetime of Howard, as the character was not particularly popular.
Some Kull stories here

Not to be confused with the big Urgals from Christopher Paolini's Inheritance Cycle (though Kull probably inspired their name) or with the movie Krull, which is completely unrelated to Kull.

There was a 1997 movie Kull the Conqueror with Kevin Sorbo in the title role.

"By this axe I rule! This is my sceptre! I have struggled and sweated to be the puppet king you wished me to be — to king it your way. Now I use mine own way! If you will not fight, you shall obey! Laws that are just shall stand; laws that have outlived their times I shall shatter as I shattered that one! I am king!"