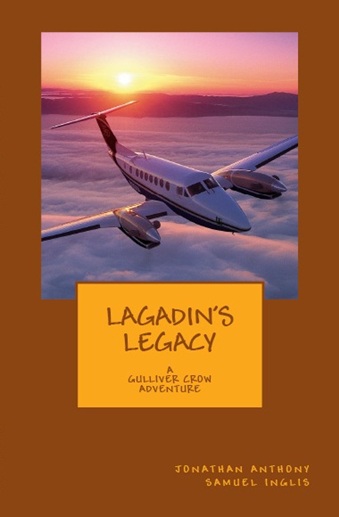 It is only in adventure that some people succeed in finding themselves.
—Andre Gide, from the opening pages
Advertisement:

Lagadin's Legacy (previously titled Tomb of the Elf King) is an adventure novel written by Jonathan Anthony and Samuel Inglis, two first-time writers who live in different countries but communicate via Internet to collaborate on tales. This is the first of such, and is meant to kick-start a fictional universe devised by the duo. It was published in December 2012 through Amazon.com's Create Space company.

Gulliver Crow is a treasure-hunter-for-hire, along with his partner, Boris Palenik. Crow happens to be the wayward son of a deceased archaeologist, and he is constantly haunted by an apparition of his father. One day, Crow is hired by a man to retrieve an ancient necklace supposedly cursed with incredible power, the only relic of an ancient kingdom of elves that existed many years ago. But on this adventure, Crow and Boris bump into a brother-sister team of archaeologists, who join their party after they come under attack by nefarious parties also desiring the necklace. In the course of the quest to find the tomb of the last Elf King, the only way to unlock the necklace’s power, Crow goes through some serious Character Development, and Boris is revealed to be much more than just your typical comic relief sidekick…