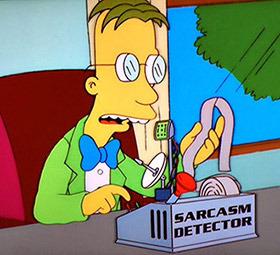 Oh, a sarcasm detector. That's a real useful invention.
"A little sincerity is a dangerous thing, and a great deal of it is absolutely fatal."
— Oscar Wilde
Advertisement:

In a World of Snark, every character is a Deadpan Snarker. These works usually lie far on the Cynical end of the Sliding Scale of Idealism Versus Cynicism, and most of their humor comes from the characters' reactions to what they perceive as their crappy lives and constant snarking matches.

This is not to say that this world is incapable of having genuine, tender moments. Half the cast may be jerks, but the rest may be jerks with hearts of gold. If they're all jerks, it's a World of Jerkass.