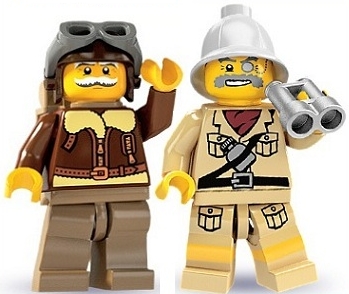 "There's no place we won't go! ... except Offbrandia, nothing but pirates there."
Advertisement:

Whether it's a trip to the Serengeti, a jaunt through time or pulp/steampunk adventures, these are the outfits you want to wear! Worn by the Adventurer Archaeologist, Lady of Adventure, Great White Hunter, Egomaniac Hunter and Gentleman Adventurer, as well as the Ace Pilot, and, sometimes, the Bold Explorer.

There're three stock ensembles that make up this trope, though it's sometimes mix-and-matched with other Stock Costume Traits:

Safari Outfit: Beige or tan linens, big brown belt, boots, probably a rifle and binoculars; also, a safari hat called a pith helmet. (Monocle optional but recommended). Usually, the wearer is book-smart but ignorant of what they should actually wear for the expedition. Counterintuitively most of them needed more coverage in Real Life to avoid sunburns and harmful insects and during the age of African exploration the pith helmet was the narrow-brimmed model

◊ of Zulu War vintage, not the broad-brimmed "Bombay Bowler" of the post-1900 years.

Airman: Start with a bomber jacket (the kind with a large wool collar and lapels), then add a Scarf of Asskicking, leather gloves and light boots.note These double as Stylish Protection Gear; aircraft cabins can get pretty cold at altitude, and the scarf also prevents neck chafing from a flyer constantly turning his head to check his environment (especially in wartime). Usually has goggles (which may or may not be useful) or a flying helmet, or sometimes a peaked cap from whichever air force they learned to fly in. When the Airman travels IN SPACE! they'll probably swap out for a Latex Space Suit. If armed, it'll be with a pistol.

Archaeologist: Think Indiana Jones. Nice Hat, typically a wide brim fedora, Perma-Stubble if male, leather jacket, long-sleeved collared shirt, plain pants and sturdy boots, pistol holster/harness, and Ancient Artifact-holding satchel. If the character is a trope-for-trope Expy of Indy, they'll also have a whip. A vest may substitute for the jacket, and the pistol harness might become two for Dual Wielding.

All three tend to wear jodhpurs

(pants with extra room around the thighs to aid in horseback riding). A Mad Max, post-apocalyptic Wanderer look can be related. A few settings take the Airman outfit, remove the scarf, adds chains, lots of belts (though a few shy of Too Many Belts), much more grime and a rifle. A trusty dog is optional, but recommended, but a motorcycle works as well. To add a Steampunk flavor to either of the above, add clocks, light metal armoring, a tool belt, and Ray Gun as needed.