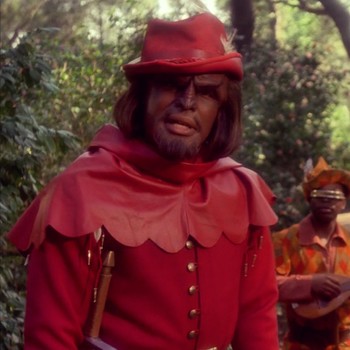 Worf protests, he is NOT a merry man!
Advertisement:

The planet Tagus III, which hosts some spectacular historical ruins that have been closed off to outsiders for a century, is a sort of holy grail for Federation historians and archaeologists. For this reason, the Federation Archaeological Council has decided to hold their annual convention in orbit, aboard the Enterprise. And Captain Picard is to give the keynote address. The normally-unflappable Captain is, well, flapped: an amateur archaeologist himself, he is positively geeking out at the opportunity to give the address, while at the same time feeling completely unworthy to address the Council at large. Troi finds him working into the wee hours on his speech and advises him to get some rest.

Returning to his cabin, Picard suddenly realizes that something is amiss: there's a Risan horgh'an on his coffee table. Now how did that get there? Well, maybe the lovely lady who emerges from his bedroom a moment later put it there. It's Vash, the Lara Croft of the 24th Century, and the object of Picard's fling on Risa a year ago. And it would seem that she's now seeking jahmaharon.

Well, Picard's not about to let a lady down...

The next morning, over tea, Picard and Vash catch up. Picard assumes that she's here to attend the convention, and Vash... doesn't say otherwise. And it's at this moment that Doctor Crusher shows up. A few awkward introductions later, it comes out that Picard never mentioned his adventure on Risa to his crew. Picard suddenly realizes that he has some... captain stuff to do... yeah, that's it... and excuses himself. Crusher offers to take Vash on a tour of the Enterprise, as well as get to know Picard's mystery woman a bit. They head to Ten Forward, and along the way Vash learns that Jean-Luc Picard is, in Crusher's words, a "very private man" who never talks about his personal life with his crew. Vash is a bit put out to hear this, but once they're at Ten Forward, they have a different issue. the off-duty Commander Riker is there, and he immediately tries his moves on this lovely mystery woman. Vash, being a worldly type herself, doesn't fall for it, but when Doctor Crusher must excuse herself to deal with a medical emergency, Vash allows Riker to continue the tour with her. The tour eventually leads to the Bridge, where it all starts to go wrong. Picard comes out of the Ready Room just in time to catch his private and professional lives colliding as Vash strolls around the Bridge and finally sits in the Captain's Chair.

The awkwardness continues on through the day, and into the welcome reception. Vash hobnobs with dignitaries and the Enterprise Senior Staff, and it becomes clear that Picard told absolutely no one about Vash or about what they did together on Risa. When confronted with this, Picard claims that it would be inappropriate of him, as the commanding officer, to share such intimate private details with his crew. But Vash doesn't buy it; she's hurt by Picard's compartmentalizing of his life like this. Maybe her presence here just embarrasses him? Maybe he regrets their ever meeting in the first place? Maybe he'd just as soon forget she exists now? Both of them storm off: Vash to her quarters, and Picard to his Ready Room. Unfortunately for Picard, he's got another unexpected guest waiting for him there:

In no mood for the usual games, Picard demands to know why he's here. Q tells him that he owes Picard a debt. The last time they met, Picard saved Q's life. Not wanting to owe the Human anything, he wants to do something to pay him back. Of course, right now all Picard wants is to be left alone. But Q presses the issue: maybe Picard would like some help with his keynote speech? Maybe he'd like to see the forbidden Taguan ruins, so he can add some first-hand experience to it? Q could even take him back in time to before the ruins were closed off to visitors if Picard wants to be a stickler for the rules. Picard is momentarily tempted by this, but he declines and once again asks Q to just leave him be. Q decides he'll give the Captain some time to think it over, and he vanishes. Picard then decides to let Riker know:

Picard: I've just had a visit from Q.
Riker: Q?! Any idea what he's up to?
Picard: He wants to do something nice for me.
Riker: [Oh, Crap! expression] I'll alert the crew.

Later, feeling guilty, Picard heads to Vash's quarters and attempts to apologize and explain himself. Vash means a lot to him, and he's not unhappy that she's here and—hey, why does she have a map of the Taguan ruins? And some archaeological equipment hidden in a corner over there? Once again, Vash is about to something less-than-legal and dangerous, and she's doing it on Picard's ship. Well, that's the last straw for both of them. They both say that are who they are—she's an Adventurer Archaeologist who plays fast and loose with the rules, and he's a proper, rule-respecting Starfleet officer—and they will not change for anyone. Picard leaves in a huff, just in time to miss Q poking his head into the scene and observing the fight.

Later, as Picard tries to sleep, Q pops in and taunts him about it. He declares that he's finally found Picard's weakness: a woman. Picard's feelings for Vash have made him weak, Q claims, and Q offers to, ahem, get rid of this distraction for him. Angrily, Picard warns him away from Vash and once more tries to get him to just go away. Q does... for now.

The day of Picard's keynote address arrives, and Picard stands before the gathered Council Members and begins his speech. As he speaks, strange things start to happen: one person at a time, the clothing of his Senior Staff changes, from their uniforms to something more medieval-looking. And then finally, Picard and his crew are teleported away from the Enterprise. They find themselves in a heavily wooded area. And not just any wooded area: this is meant to be Sherwood Forest, circa the 12th Century. And Picard and his crew are dressed up like Robin Hood and his Merry Men. Clearly this is Q's doing. And sure enough, they are shortly attacked by several armed men, led by a mounted nobleman. Outnumbered, they flee deeper into the woods.

After regrouping, Picard and company are soon visited by Q, who has cast himself as the Sheriff of Nottingham, and who promptly explains the situation. This is a simulation, designed to prove to Picard how much this silly little emotion called "love" has ruined him. Picard is Robin Hood, and he must pull off one of Robin Hood's famed adventures: rescuing the Maid Marian from the evil Sir Guy of Gisbourne. Sir Guy was, naturally, the mounted nobleman who attacked them earlier. And guess whom Q has cast as Marian? All Picard has to do is risk his life and the lives of his crew to rescue this woman, thus proving Q's point of how destructive his love for Vash is. Then Q departs, but not before warning Picard that this simulation has a life of its own: not even Q knows what's going to happen next, and the danger is very real.

Meanwhile, back at Sir Guy's castle, Vash has no idea what just happened, where she is, or why she's wearing this really uncomfortable dress. And her handmaiden isn't helping much, thinking all this talk about actually being named Vash and needing a stiff drink means that she's been "bewitched." At this moment Sir Guy reappears, and offers "Marian" his Scarpia Ultimatum: marry him, or he will execute her as a collaborator with a notorious outlaw. Vash not being Marian, and therefore not as pure of heart, decides to string Sir Guy along, pretending to change her mind and be receptive to his affections. At least until she can figure out what's going on here.

Back in Sherwood, Picard gives Riker his orders: he is going to Sir Guy's castle alone. The rest of the crew will wait here for his return. Riker protests, but Picard is adamant. He's not about to risk any other lives for one of Q's sick games. Meanwhile, at the castle, Q is surprised to see what's going on: Sir Guy and Marian being civil to one another? The execution is off, and the wedding is back on? This wasn't part of the plan. Maybe there's more to this Vash woman than he thought...

That night, Picard sneaks into Vash's quarters. He quickly explains the situation, then attempts to bust her out. But Vash isn't going for it. Coming alone was a bad plan, she says, and she'd prefer to wait for a more certain opportunity to escape. On her own, if need be; she certainly doesn't need Picard to rescue her. Not really interested in hashing out their personal issues at this particular moment, Picard tries to take her by force, but to no avail: Sir Guy's men bust in, and Vash grabs Picard's sword and hands him over to Sir Guy personally. Sir Guy hustles Picard off to the dungeon, while Q watches all this with growing interest.

Once left alone, Vash starts writing a letter, intending to have her handmaiden deliver it to the rest of Picard's crew. Before she can finish, Q bursts in, having finally figured out what she's up to. She's stalling for time: getting Picard captured saved his life for the moment, and now she's sending for Riker and the others. Q offers an apology to Vash; he's underestimated her. Q just thought of her as bait to torment Picard, with no thought to who she was as an individual. The fact that she's a smart and sneaky person in her own right never occurred to him, and Q decides that she's worthy of further study. But not right now: he calls for the guards and has her locked away. Seems the wedding's off again.

The next morning, the double execution is about to begin. Picard and Vash snipe at each other all the way to the block—and in the background, several robed figures converge on the scene. Clearly, Riker and company weren't about to let their Captain walk into a deathtrap. Data causes an explosion as a diversion, and in the chaos they attack. Picard swashbuckles his way through Sir Guy and to Vash, and the day is won.

Q appears and declares the exercise over and his debt repaid. Q claims that he's succeeded in showing Picard that love brings out the worst in him, making him reckless and foolhardy. Vash counters that, instead, it brought out the best in him: his courage, his passion, and his willingness to risk his life for another person. Q seems to concede the point, then he transports everyone back to the Enterprise. Well, almost everyone: Picard and company find themselves back in the assembly hall where the keynote address was being given, but Vash is nowhere to be found.

Later, in Picard's ready room, Vash and Q appear. They've been having a little chat, it would seem, and Q has made Vash an offer she couldn't refuse. Q has found a kindred spirit in the Loveable Rogue Vash, and he's offered to take her on an extended tour of the universe. She will go with him and see wonders no human has ever seen. Picard is at first alarmed, but then he realizes that this is what Vash wants. After getting Q's assurances that she will be safe, he wishes her well. And the Adventure Continues.

Tropes featured in "Qpid" include: