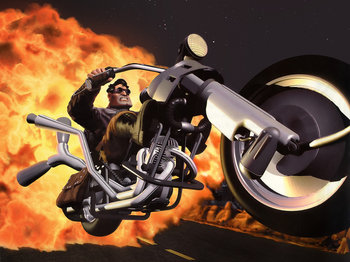 Bonus points for not looking at the explosion.
"Hell hath no fury like a flaming skeleton on a motorcycle."
— Ultimate Marvel vs. Capcom 3, about Ghost Rider
Advertisement:

So you've got one mean setting. Police Are Useless, and usually corrupt. Half the time the place is enveloped in smoke, fog, and general unpleasantness. Violent thugs rule the streets, and you would have to be crazy to even leave your house if you had even the slightest excuse not to.

Only one type of badass character can make it around these parts. He's got the longcoat, the shades, and the (optional) smoking addiction. But what really sells it is the Cool Bike.

Possibly popularized by the Marlon Brando movie The Wild One and the James Dean movie Rebel Without a Cause, the Badass Biker is the absolute epitome of the viciously cool vagrant tough guy. Whether they are traveling through the desert, city streets, a coastal road, or up a wall, this character and bike combo exudes an aura of awesome that eclipses just about any other badass + vehicle combination.

A pretty universal trope as media from America, Europe, and Japan all love to employ badass bikers. They're also surprisingly versatile, since Badass Bikers can be heroes or anti-heroes, or, in gangs, they can be villains or mooks.

A Badass Biker who is a thug or gang member usually fits into All Bikers Are Hell's Angels as well. Sometimes, his entrance is a Dynamic Entry. A Badass Biker might also drive while their lover hugs them tightly from behind romantically. Most of those enter Helmets Are Hardly Heroic, riding with heads fully exposed.