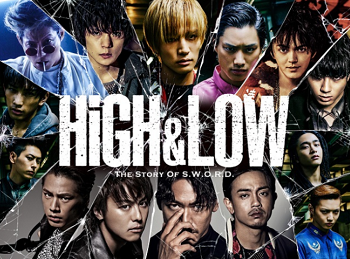 Mugen was a legendary team that used to run their town. But after a showdown with the Amamiya brothers, both Mugen and the brothers disappeared. The resulting power vacuum gave rise to five new gangs, collectively dubbed S.W.O.R.D., each taking a part of the region under their control.
Advertisement:

However, Kuryu Group, trying to regain their former power, start their plan to take over the town. They send their newest member to take care of things, a familiar face to the the Sannoh gang...

High&Low was created as a multimedia project by LDH, an entertainment company that manages multiple bands (most notably the EXILE TRIBE family), actors, among other projects. Many of High&Low's stars are singers, dancers or actors under their management, and the songs for the show are made by their bands. High&Low was enough of a success that it also spawned 5 movies (and counting), two manga (one by CLAMP), anime shorts, a theme park, and even a live concert to tie into the show.

Tropes For High&Low The Worst: