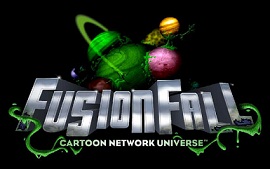 The time is now. The hero is you.
A Massive Multiplayer Crossover in the form of a defunct MMORPG made by Cartoon Network. Planet Fusion, a living planet made out of a green, gooey substance, has attacked Earth, and it's up to you, a bunch of animesque versions of characters from Cartoon Network series, and many, many other people to stop the alien invaders. The game has a simple but effective equipment system arming you with guns, swords, bombs, guitars, frisbees, and other items to defeat the opposition, while giving you shirts, pants, and shoes to protect yourself, while masks, helmets and capes/backwear are just for show.
Advertisement:

However, the biggest change to the MMO formula came with Nanos, miniature versions of Cartoon Network characters that are gained on level-up instead of stat bonuses. You can have three nanos with you at all times, and each has three abilities, of which each can only use one, granting you a variety of different layouts and choices, such as having Numbuh Two provide super speed, the ability to warp back to specific locations in dungeons, or increased money gain upon defeating enemies.

Cartoon Network co-developed the game with a Korean company, Grigon Entertainment, who went bankrupt around the time of the game's launch. Having only been involved primarily in the story/idea elements, CN found themselves with a large amount of un-/barely finished assets which they tried, and failed, to add onto. In a last ditch effort, the team celebrated the "Birthday Bash" in 2010. New NPC's and items were shown off from newer Cartoon Network properties which were originally intended for future expansions, but only a few of them would be added into the game at a later point. Meanwhile, the team attempted to create "FusionFall Adventures," three questlines themed to specific shows that got mostly negative reception from players, mostly due to the drop in quality. After a long stint of no significant updates (beyond the disabling of the chat feature in June 2013), Cartoon Network Games finally announced the game's closing on August 23rd and granted all players max levels and unlimited funds until the game's final day on August 29th.

for your browsing enjoyment.

There's also a spinoff set in the same continuity as the main game called FusionFall Heroes. Instead of being an MMO platformer like FusionFall, it's an overhead 3D action game ala Diablo with both a single player and online multiplayer opponent that lets you choose between various Cartoon Network heroes and take them into combat. Eventually, after a slew of bad reviews, this game was also phased out.

The game itself can be considered a who's who of Cartoon Network's original characters up until 2011. Here is a list of series represented by characters in the story:

With everythingnote Not premiering after the end of the game's release BUT Mike, Lu & Og, Sheep in the Big City, Robotomy, The Problem Solverz, and Whatever Happened to... Robot Jones?, showing up in some other way.