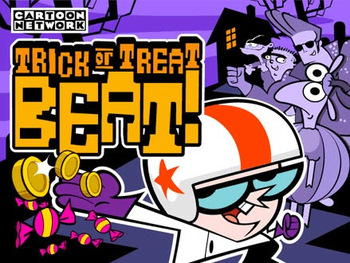 Trick or Treat Beat is a Web Game that was on the Cartoon Network website.

It's Halloween Night, and you're out to get all the candy and money you can. It's a big neighbourhood out there, with lots of houses to go trick or treating at. So, best get started to come home with the biggest haul you can manage.

The game was released in 2004. Two versions existed: One featured characters from Codename: Kids Next Door, and the other featured Cartoon Network's other original characters. The latter was made for a Trick or Treat for UNICEF promotion, but once it was over, it was reworked into a KND game.

The game features characters from