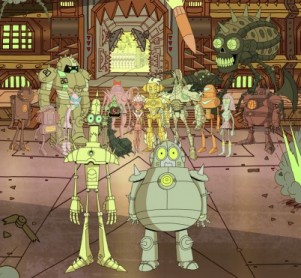 Take the robotic idea of a New York Times Bestselling Children's Book author, add the creative juices of some the geniuses behind Superjail!, and make it fit for primetime. What you get is Robotomy, a show about two teenage robots (Thrashernote voiced by Patton Oswalt and Blastusnote voiced by John Gemberling) and their attempts to get through high school and robo-teenage life. Taking place on a robot planet called Insanus, the cast of characters include a Sadist Teacher (Mr. Dreadnotnote voiced by Dana Snyder), a homicidal Spoiled Brat, and a bi-polar Lethal Joke Character (Weenusnote voiced by Michael Sinterniklaas). Something is destroyed every other second, and some of the jokes make you wonder if the series would have been better off on Adult Swim.

Only lasted one season of ten eleven minute episodes because of high production costs and a lack of foreign investment to balance it out (no one outside of the United States wanted to even touch it because the show's excessive violence and rude, suggestive humor would subject it to major censorship in other countries). The show now has somewhat of a cult following, and had an unsuccessful Facebook campaign to save the show.

It aired on Cartoon Network. (Specifically, right after MAD on Monday nights, since you wouldn't know if we didn't tell you.)

The show did reappear on the short-lived revival of Cartoon Planet between 2012 and 2013 and the entire series was on Netflix until early 2015. On Janaury 9, 2015, the series premiered on the Canadian version of Cartoon Network (not Teletoon; a Cartoon Network feed that's available in Canada).