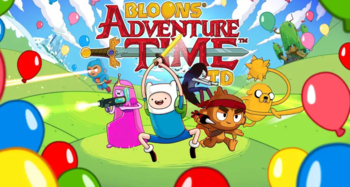 Time to pop some bloons, hero style!
The bloons have invaded the land of Ooo and it's up to Finn, Jake and the monkeys to stop them! Bloons Adventure Time TD is an awesome crossover between the award-winning animated series Adventure Time and the #1 Tower Defense game, Bloons TD!
— The soft-launch App Store description
Advertisement:

A Crossover of Bloons Tower Defense and Adventure Time called Bloons Adventure Time Tower Defense, which had soft launch access for those selected continents* (Australia, New Zealand, Philippines, and Singapore) on July 14, 2018, and was released worldwide on August 28 of the same year, with a PC release hitting Steam on January 16 2019. Unlike the regular BTD games, it features heroes that can only be placed once on the map, allies that can be equipped to specific heroes (alongside trinkets and weapons), three new Bloon types (Shielded, Zombie and Ghost, the former of which was only previously seen in Bloons Super Monkey 1 and 2), a new story with a voice cast, and 3D MOAB-class Bloons. See the trailer for it here.