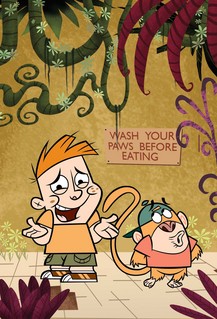 "You think your school's a zoo? My gym partner's a MONKEY!"
Advertisement:

A Cartoon Network animated series created by the husband-and-wife team of Timothy and Julie McNally Cahill (who would later go on to produce Littlest Pet Shop (2012)) that aired from 2005 to 2008. The show lasted four 13-episode seasons that came and went very quickly (hence the short run in years) and got two hour-long specials; a made-for-TV movie, "The Big Field Trip" and a musical special aptly named "Animal School Musical."

Due to a clerical error involving a misspelled last name, a middle-school aged human named Adam Lyon is sent to attend Charles Darwin Middle School: a school for talking zoo animals. Rather than fix this problem, he befriends an animal named Jake Spidermonkey and deals with the obvious problems of being a human in an environment made solely for animals.

Hey Adam, I wonder how many tropes on this list relate to my butt?:

When Jake challenges Adam after he accidentally gets hit with a monkey booster shot he really goes to town with this.

When Jake challenges Adam after he accidentally gets hit with a monkey booster shot he really goes to town with this.