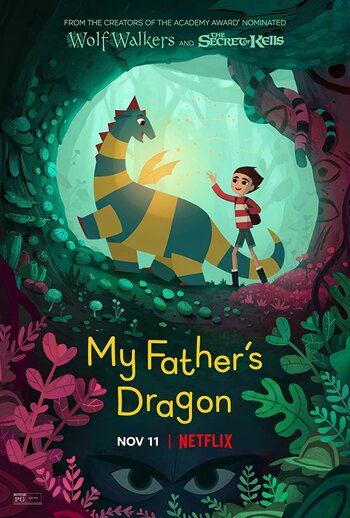 My Father's Dragon is an animated film adaptation of the first book of the trilogy of the same name, co-produced by Netflix Animation, Mockingbird Pictures and Cartoon Saloon. It was directed by Nora Twomey, who previously directed The Breadwinner and co-directed The Secret of Kells.

An unseen older woman tells the story of her father, Elmer Elevator, who moved from his small town with his mother to the dreary city of Nevergreen, after their shop was foreclosed. As their financial situation gets in the way of Elmer's dream of reopening the shop, their situation seems hopeless, until a talking cat voiced by Whoopi Goldberg tells Elmer about a real, firebreathing dragon at Wild Island.

With dreams of funding the shop by using the dragon as an attraction, Elmer sets off to Wild Island, but discovers that he was unknowingly put on a rescue mission to save Boris the Dragon from the animals in it. Worse yet, the island itself is also in danger of sinking, and Elmer must help both Boris and the animals find an answer to their predicament.

The movie was released on Netflix on November 11, 2022, and was dedicated to co-writer John Morgan, who passed away before the movie's release.

My Father's Dragon provides examples of: