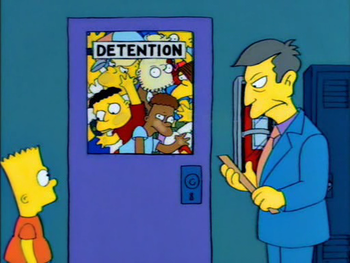 In Anglophone pre-collegiate schools, detention is a disciplinary action where students are required to stay in a designated room, keep quiet, and do absolutely nothing for some amount of time. In fiction, detention is one thing where a well-to-do student does not want to go to. The other one is dodgeball. The room is run down, dimly lit and gritty, the teacher running the room is keeping a watchful eye on you and may make your stay a living heck, the desks are filled with bullies and delinquents, graffiti is everywhere, and there're decades-old gum beneath your desk. And heaven forbid if you spend your time in detention on a weekend.

Naturally, the student will find ways to get out of this hellhole, with the help of the delinquents of course. In real life, failing to show up to detention or bailing out can lead to an even more severe disciplinary action such as longer detention periods, suspension or even expulsion.

Can be the school equivalent to a Prison Episode (in which case, it may involve a Juvenile Hell). It can be a form of a Bottle Episode due to the nature of the room. Compare Standing in the Hall, the Japanese equivalent; After-School Cleaning Duty, When a student is made to clean school property after school; and Writing Lines, when a student is made to write something they are not supposed to do repeatedly; and Summer School Sucks when a student is forced to do summer school. See also The Breakfast Plot.