Characters / My Gym Partner's a Monkey 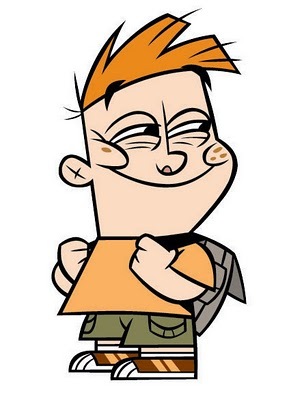 A human boy who was transferred from Chester Arthur Middle School to Charles Darwin Middle School by an accidental misspelling of his last name from "Lyon" to "Lion". 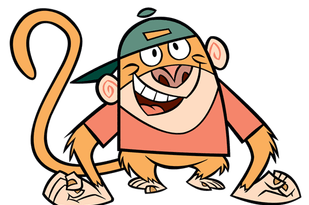 A spider monkey who quickly became Adam's best friend and gym partner. He has an obsession with his own butt and tends to be an annoyance and inconvenience to others with his rudeness, misbehavior, and destructive, reckless, trouble-causing tendencies; however, he is often very possessive of Adam and hates not having him around regularly. Jake is emotional, goofy, and takes to heart some of Adam's comments and actions, leading to some overly dramatic and exaggerated reactions. He can be lazy and selfish, but at the same time he is also fairly sensible. 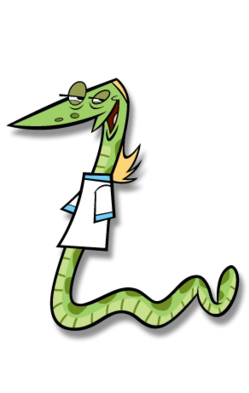 An easy-going, street-talking green tree python. He is an underachiever and excessive daydreamer who's gullibility allows him to believe anything he hears, which makes him a constant source of misinformation. 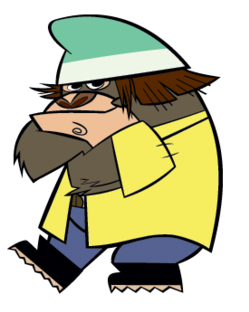 A highly intelligent lowland gorilla who serves as the anti-bully at the school and often gives confusing wisdom to people. He speaks in a soft-spoken and nearly monotonous manner, often stringing together technical words as a matter of his normal speech. 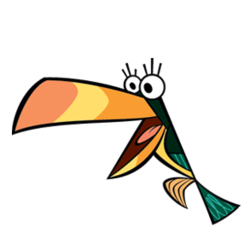 A female Keel-billed toucan, who is loud-mouthed, acerbic, dominating and materialistic, although she considers herself to be mild-tempered and low maintenance. 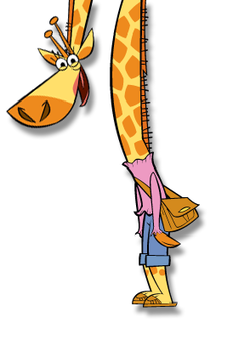 A female masai giraffe. Her towering height only adds to her feelings of insecurity as she tries desperately to blend into the background. She has a crush on Adam. 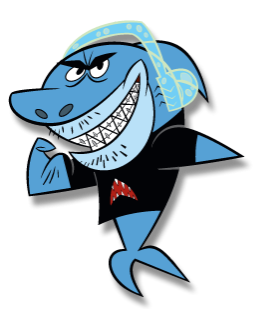 A bull shark and the school's bully.

A nine-banded armadillo with a Texas accent and a reporter in the school media.

Voiced by: Phil Lamarr
The condescending, know-it-all leader of The Spiffies with an over inflated ego and Level 57 Armor in Prisons and Lizards.

The sweaty, pizza-faced pig, who's second in command on the team.

A wimpy, asthmatic elephant with nasal congestion. Being the least frail of the bunch, he provides "the muscle".

A scientific, brainy squid, who's means transportation is being pushed around in a mobile fish tank.

An annoying, eclectus parrot, with an extensive list of allergies, diseases, phobias, etc. Often acts as the runt of the group.
David Coppertrout
Voiced By: Tom Kenny
A trout with the ability to grant wishes.
Advertisement:
The Pretties 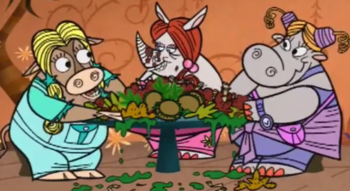 A fat, egotistical, quick to anger hippopotamus, who'd gladly crush, kill, and destroy anything that comes between herself and a taste of some delicious junk food (even her own friends aren't safe).

The beta-bitch of the posse, though arguably the most tolerable of the group. She's the kindest to Adam, although this respectful behavior allows the other two to upstage and manipulate her.

A braindead, blonde-haired bimbo, who talks with a valley girl accent. Her stupidity outweighs her own body weight, but not by much.
James Ant

A macho red ant, who seems to have no trouble, humiliating himself. He's smallest student at Charles Darwin Middle School.
Dickie Sugarjumper

A sugar glider and the school jokester.

A vulture and the dark, depressing, goth kid.

A female dolphin and the bitchy and snobbish captain of the CDMS Jungle Squad. 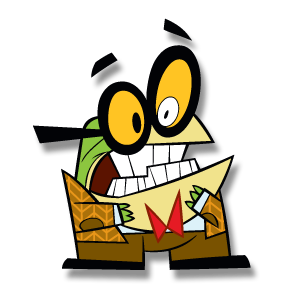 A rhinoceros teacher usually seen teaching whatever class is not covered by the other teachers. 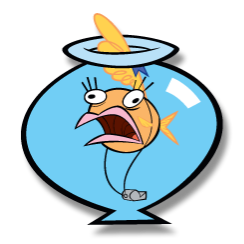 A deep-voiced goldfish and the school's gym teacher. 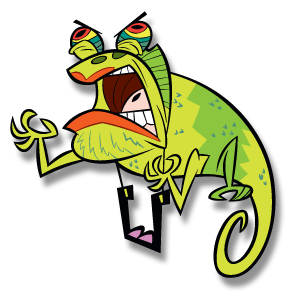 The overly-dramatic drama teacher, who loves her job a bit too much. 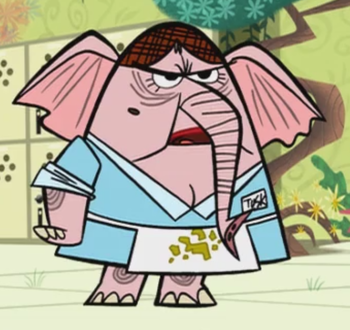 The African-Elephant lunchlady, known for her food being delicious for all the animals who eat it, but disgusting to Adam.

The art teacher, with no appreciation for fine arts.

An Orca whale who is usually seen as the teacher of the nerds. Accompanied by whale noises whenever he talks. 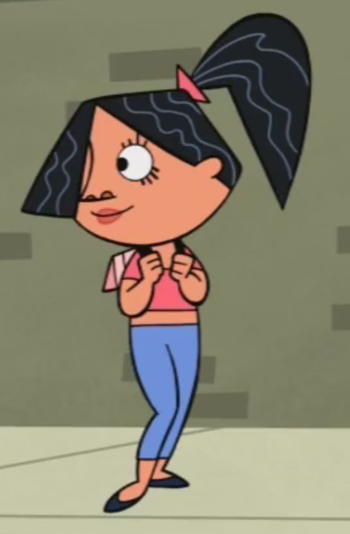 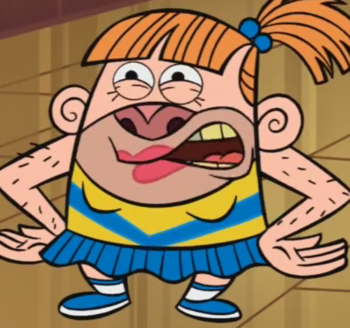 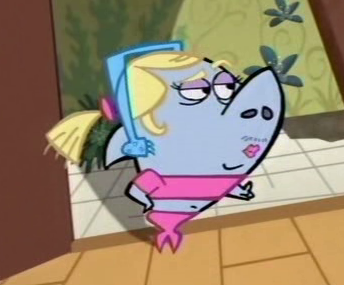 Rick Platypus
Voiced by: Gilbert Gottfried
An obnoxious platypus who told annoying jokes, and was believed to be an evil alien by everyone else.
Rufus Hyena
Voiced by: Grey Griffin
Jake's hyena friend, with a real sense of humor, to say the least.
Lola Llama
Voiced by: Sarah Hagan
A crazed llama, who stole Ingrid's life.
Soupy Baskington
Voiced by: Tom Kenny
A basking shark with a southern accent.
Larry Raccoon
Voiced by: Phil LaMarr
A raccoon who was expelled from CDMS.
Herman Hermit Crab

An aqua-squatter, who outgrew his shell and found a new home in Adam's locker.
Alistair White Tiger
Voiced by: ???
A bulked up, self-admiring arctic tiger, who left CDMS years back, as part pf a foreign exchange program with Henry.
Inga Giraffe
Voiced by: Grey Griffin
Ingrid's older sister, who goes to Marlin Perkins Wild High School.
Little Lord Saucypants
Voiced by: Rick Gomez
Jake's extravagant cousin, famous for being the sidekick of musical idol, Dobie Broadway Jr.
Amazon Kevin
Voiced by: John DiMaggio
A famous animal hunter, who Adam is the biggest fan of. He is notoriously hated in the animal community, for the way he treats animals.
Captain Corporate
Voiced by: ???
A big-business talent agent, who hires talented people, works with them for a few hours, takes their money, and leaves.
Old Joe

A former janitor at Charles Darwin Middle School, while it was a human school. Now he's a ghost, cleaning the boiler room.
Possum Girl
Voiced by: Sarah Hagan
The only other human other than Adam. She pretended to be raised by possums, just to get transferred to Adam's school.
Mr. Lemons
Voiced by: ???
Adam's bean-hungry boss, when he worked as a sign twirler at the used car dealership that one time.
B.A.A.A. Activists
Voiced by: Rick Gomez (leader)
(Because All Animals Are Amazing) is a group of animal rights activists, who accused CDMS of animal-on-animal abuse.
Mr. Flam Fip Shammerwam

The hotel-esque bellboy of the Zoo Aquarium, who helps animals get to their habitats or "rooms".