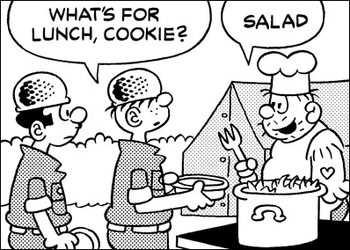 Asterix: Look, no joking... what is it?
Roman soldier: It's legionary rations... you'll be getting it every day. Corn, bacon and cheese. All cooked together to save time.
— Asterix the Legionary
Advertisement:

Whenever men work in the great outdoors, be they cowboys, miners, lumberjacks or soldiers, they work up a big appetite. And someone's got to feed them. In small outfits, the workers might take turns cooking up the vittles, but above a certain population, it makes sense to have a dedicated Camp Cook. Besides, someone has to drive the chuckwagon. Since the primary requirements for food in these circumstances is its volume, nutritional value (in particular, being high in calories) and an ability to be prepared fast, in large quantities, with primitive means and from easily preserved and efficiently stored ingredients, things like the food's look and taste take a back seat.

In fiction, camp cooks tend to be a source of comic relief, with many a gag about their horrible cooking or coffee, and their inability to take criticism on the subject. Many camp cooks are older folks, no longer able to do the main work of the camp, but often an ethnic minority is used instead. (In older works, this frequently is accompanied by truly awful stereotype humor.) Don't be surprised if the cook has a Let's Get Dangerous! moment near the end of the story—many are quite deft with their cooking implements. Also a common element of summer camp stories, especially of the Summer Campy variety.

A classic "bit" for the camp cook is ringing a metal triangle to announce that dinner is ready.

See also Military Moonshiner and Team Chef. Nothing to do with Always Camp. (In which case, he'd likely insist on being called a chef.)