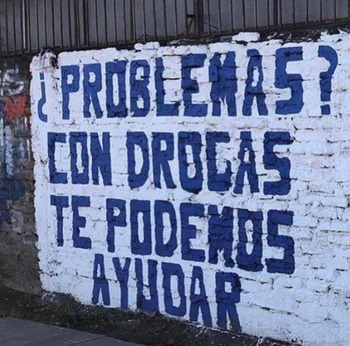 Not "Misspelling Out Loud" but still making noise. "Problems? With drugs we can help you"
Advertisement:

Someone has to spell a word out loud, for the sake of clarity, for emphasis, for Censorship by Spelling, or because they're in a Spelling Bee, and they make an elementary spelling mistake or even spell a different word entirely. The reason can range from being illiterate to dyslexic, all the way to being able to read just fine but having never seen the word in written form. If it's the latter, this usually reflects negatively on the character's attentiveness, and if it's either of the former it reflects negatively on the character's intelligence. In the case of spelling bees, though, sometimes the child actually knows the correct spelling and would not normally spell such a word incorrectly but is intentionally losing the bee because they're sick of their parents putting such immense undue pressure on them at their age.

In English, these common spelling mistakes include inserting a spurious silent E, changing a hard S to a Z, or almost any of the mangled spellings whose deliberate use is described under Xtreme Kool Letterz.

Compare Acquired Error at the Printer, "L" Is for "Dyslexia", Malaproper, Two Words: I Can't Count.