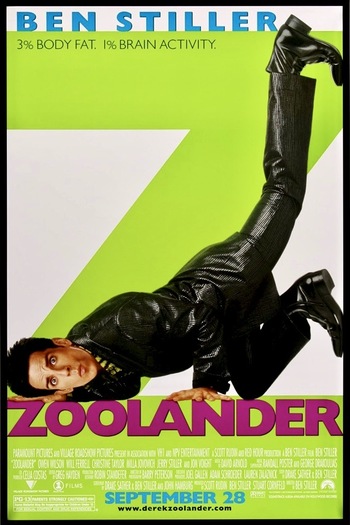 Derek Zoolander (Stiller) is a really, really ridiculously good-looking male model, who also happens to be incredibly shallow and not too bright. He suffers a professional and personal setback when he loses the Male Model of the Year crown to rookie Hansel McDonald ("he's so hot right now") and three of his friends to a freak gasoline fight accident.

His manager Maury Ballstein sends him to a week-long day spa, but it turns out to be a brainwashing center, where Derek becomes a sleeper agent programmed to assassinate the prime minister of Malaysia, who is obstructing the fashion industry's use of cheap Malaysian sweatshop labor. It's up to Derek, his love interest Matilda Jeffries, and his rival-turned-friend Hansel ("he's so hot right now") to foil this plot and help Derek live past thirty.

Generally considered to be the film that started "The Frat Pack", a loosely organized group of popular comedians who starred together in some of the more successful comedy films of the 2000s. Not only did it bring most of the core members together, it also established the unique blend of slapstick comedy, social satire and over-the-top characters that characterized their style of humor. The group had a rotating stable of unofficial members, but Stiller, Wilson, Ferrell and Vince Vaughn (who has an uncredited cameo as Derek's brother) were generally considered to be the essential ones. This was the first film where the four appeared together, but not the last.

Not at all based on the 1998 novel Glamorama by Bret Easton Ellis.

Zoolander- A Center for Ants

Derek destroys the scale model for his proposed school and insists that for kids to learn there it needs to be 3x bigger.

Zoolander- A Center for Ants

Derek destroys the scale model for his proposed school and insists that for kids to learn there it needs to be 3x bigger.