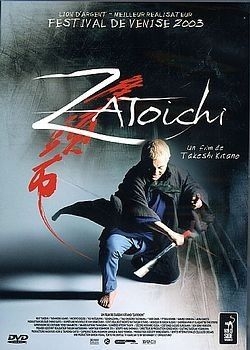 "Even with my eyes wide open, I still can't see a thing."
"Blind men can sense the world better."
—Ichi
Advertisement:

The 2003 remake/Continuity Reboot of Zatoichi (known in the Anglosphere as "The Blind Swordsman Zatoichi" or Takeshi Kitano's Zatoichi), the legendary blind swordsman of Japanese folklore. Directed (and starred) by Takeshi Kitano, who uses his full trademark trippy style to tell an adventure of the master swordsman, with Gorn, humour and Japanese music galore.

In a general sense the movie follows three seperate plotlines set in the same location (a unnamed village): The titular character, Ichi, a masseur who wanders into a crime-ridden town and ends up attracting trouble for himself, the Ronin Hattori who has to provide for his sick wife and in the process becomes an enforcer for one of the town's gangs, and two Geisha Assassins who are more than meets the eye. The three plotlines weave into one another and eventually, clash. Violently.

It was very well received and professional critics have ranked it as one of the best of the entire 27-movie franchise.