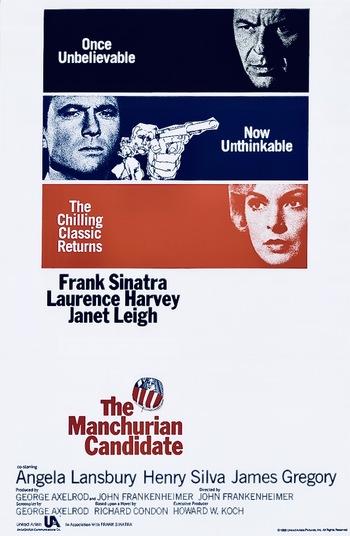 The Manchurian Candidate is a 1959 Conspiracy Thriller novel by Richard Condon, about the son of a prominent political family who has been brainwashed into being an unwitting assassin for the Communist Party. The novel was adapted for the screen in 1962 and again in 2004.

During The Korean War, Captain Bennett Marco and Sergeant Raymond Shaw are part of a U.S. infantry platoon that gets captured and taken to Manchuria, where they are brainwashed into believing that Shaw saved their lives in combat. Upon their return to the United States, Shaw is given the Medal of Honor on Marco's recommendation.

Years later Marco, now an intelligence officer, starts suffering from a recurring nightmare in which Shaw murders two of their comrades while Chinese and Russian officers look on. When Marco learns that another soldier from the platoon has been suffering from the same nightmare, he sets to uncovering the mystery... and makes a terrifying discovery. Shaw is being used as a sleeper agent for the Communists, who've programmed him as a guiltless assassin, subconsciously activated with a particular trigger: the Queen of Diamonds in a deck of cards. Thus activated, he kills the target, then immediately forgets about having done so. Shaw's controller is his own mother, who is working with the Communists to quietly overthrow the United States government via a "Manchurian candidate": her husband John Iselin, a Red-baiting senator who has been chosen as running mate for the leading presidential candidate (the plan being that Shaw will assassinate said candidate at the party's convention, thereby allowing Iselin to capture the nomination, and ultimately the White House, in the ensuing crisis). Marco is eventually able to break Shaw's programming using a deck of cards entirely composed of the Queen of Diamonds.

The 1962 film, directed by John Frankenheimer, stars Frank Sinatra as Marco and Laurence Harvey as Shaw. Angela Lansbury plays Shaw's mother Eleanor Iselin, while Janet Leigh plays Marco's love interest Rosie Cheyney. It is a very faithful adaptation of the novel, with much of the dialogue taken straight from the book.

Now, why don't you pass the time by playing a little solitaire?