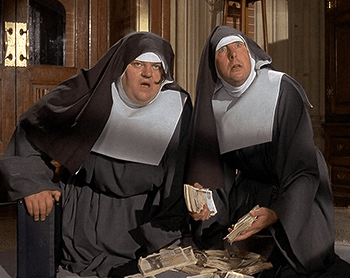 James Bond: Forgive me, Father, for I have sinned...
Q: [disguised as a Greek priest] That's putting it mildly, 007!
— For Your Eyes Only
Advertisement:

Religious clothing is visually arresting, and priests, nuns, and monks certainly are perceived to have an inherent moral authority. In fiction, scoundrels will dress up as a religious figure as a part of a disguise. This can be used for comedic or dramatic effect. The clothing of the Catholic Church is used for the most part, since all Christianity Is Catholic in the movies. For bonus points the fake clergyperson may be inside a confessional and hear the sins of an unwitting penitent.

A villain who actually is a priest or the equivalent of it is most likely a Sinister Minister.

Compare Nun Too Holy, where a character is ostensibly part of a religious order, but doesn't seem too concerned with observing its tenets or restrictions. Either being more focused on being more fun and friendly or just outright immoral.