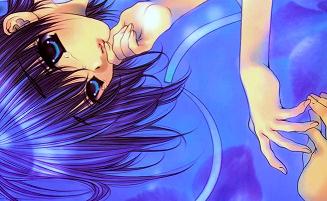 The girl who has the BIGGEST problems with men, EVER.
"I hate them! I fear them! I detest them! Because when it comes to men..."
Advertisement:

Bitter Virgin is a seinen manga by Kei Kusunoki, which ran in Young Gangan from 2005 to 2008.

When it comes to men, Hinako Aikawa has problems — problems which she confesses to an empty and abandoned church. Unbeknowest to her, her classmate, local The Casanova Daisuke Suwa, was hiding in said church to dodge his henpecking Childhood Friend Yuzu Yamamoto and his wanna-be girlfriend Kazuki Ibuse. At first he tries to shoo Hinako away, but eventually relents. He expects to hear a minor confession, and instead receives the shock of his life in learning of years of abuse Hinako suffered. Sexual abuse from her stepfather that got her pregnant not once, but twice, and resulted in at least one birth to a child one year prior, when Hinako was fifteen.

Despite initial denial, Daisuke is forced to accept his classmate has indeed suffered these horrors. As a result, even though Hinako was the one girl Daisuke had said he would pass on, he finds himself unable to stop thinking about her. He begins to watch out for her, protect her, and inevitably fall in love with her. The main obstacles he faces in pursuit of this newfound love are Kazuki's jealousy and Hinako's own difficulties around men. For her part, Hinako herself has managed to develop feelings towards Daisuke, but is unsure if he would accept her past... Therefore, the story of Bitter Virgin by Kei Kusunoki follows the two protagonists as they work through their issues and gradually come to understand one another.

Kusunoki reveals, in the last volume, that most of the manga was inspired by her own stillbirth; fortunately, she had two healthy kids afterward.