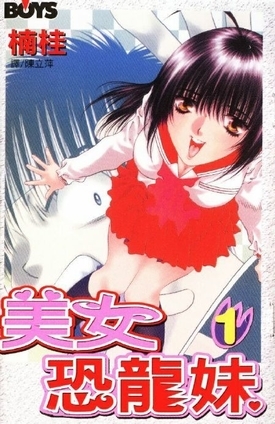 "Because girls are too violent! Too scary! Just like dinosaurs!"
Advertisement:

After a love confession gone wrong, Shingo Chiryuu is left severly injured and forced to stay in the hospital for a month. After leaving, he finds that he has developed a case of gynophobia, and sees all women as "dinosaurs". His attempts to to rid himself of this problem lead him to his school's boxing club, where he hopes he can become stronger and overcome his fears. Unfortunately for him, all the other members of the club are girls. Not only that, but the first member of the club he meets is Haruka Nishiharu, the same girl who put him in the hospital when she was morbidly obese and went on a miracle diet after the accident, to the point that she is now unrecognizable from her past self.

Written by Kei Kusunoki, Girls Saurus (and its sequel/continuation, Girls Saurus DX) is a Harem Manga about Shingo trying to get back to a normal high school life by getting over his fear of women. This is complicated by the fact that, since his accident, he seems have become very popular, and can't keep the ladies away from him, much to his dislike. The manga ran from 2001 to 2002 in Shonen Sunday Super, while DX ran in the Seinen magazine Sunday Gene-X from 2002 to 2008.