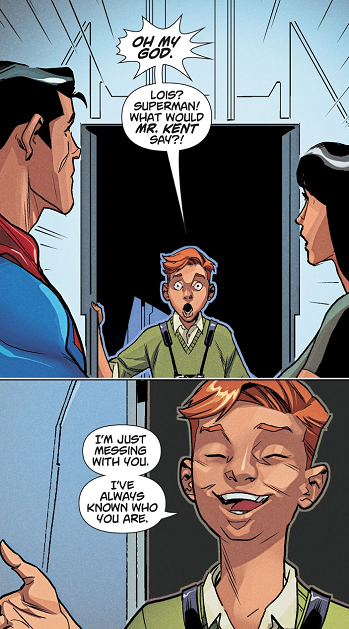 Static: Mr. Hawkins, I'm glad to see you're okay.
Mr. Hawkins: You can drop the act, Virgil.
Static: You know?
Mr. Hawkins: Wasn't hard to figure out. Why else kidnap me to get to Static? And maybe, maybe in the back of my mind, I've always known.
— Static Shock
Advertisement:

We all know about Secret Keepers: One or two people that The Hero trusts enough to tell about his superpowers. However, there are also "secret" Secret Keepers who figured out the character's secret on their own, and instead of confronting the hero about the secret, decide to keep things quiet. They then almost always take it upon themselves to help the hero secretly from the sidelines by creating distractions to allow the character to slip away to change unnoticed, letting the hero know about dangers or problems that need the hero's attention, and so on.

There's usually a given reason for this character to not just tell the hero what they know, from the reasonable to the flimsy. These include them having learnt the information in a questionable way that could force them to reveal their own secrets, circumstances being that revealing their knowledge could actually make things harder for the good guys, they've decided to wait for the hero to eventually tell them themselves, they're aware that the hero specifically doesn't want them to know the info, self-denial that this information is true, there being no good time to bring it up, or even admitting that they have no reason beyond "You Didn't Ask". Regardless, this serves as a good source of drama and comedy, as the hero and those in the loop desperately try to hide the truth from someone who is already perfectly aware of what's going on and is just playing along until the narrative decides to drop an Internal Reveal.

As for how they learnt the secret in the first place, they tend to fall into one of three camps:

Sub-Trope of Secret-Keeper. See Also: I Know You Know I Know and Keeping Secrets Sucks. Everybody Knew Already is when everyone is this. Locked Out of the Loop is what those who are openly (so to speak) in on the secret assume of this character, which may lead to a twist, depending on whether the audience knows they know.

Jazz understands her brother more than he realizes

Jazz understands her brother more than he realizes