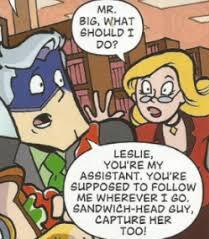 On the other hand, the dental benefits are great.
Big Bads are great at concocting elaborate, evil schemes, but their grand ideas don't often address the finer details, like how the Mooks are actually going to get to the MacGuffin and do so without starving. Enter the Secretary of Evil. She (and very likely a she due to expectations of women as supporters and not leaders) is the one that ensures there are No Delays for the Wicked, solves any logistics problems, and maybe even sorts the Sorting Algorithm of Evil.
Advertisement:

The Secretary of Evil tends to be portrayed as The Spock, serving the will of their employer absolutely, focused entirely on the job at hand, and without any regard for the atrocities being committed. This is especially likely if the boss is stupidly evil, in order to explain how anything gets done.

Expect to see one of these in a proper Evil, Inc., unless it is headed by a Diabolical Mastermind, who does their own planning. Often The Dragon or equivalent to one within the organization; however, they tend to remain in the background and not be confronted directly, sometimes falling into The Unfought. On the other hand, an inattentive boss that leaves all the real work to the Secretary puts them in a prime position to pull all the strings and become the real villain. She may also be an Ignored Enamored Underling.

The Good Counterpart to this trope is Girl Friday. However, despite intelligence superiority being a crucial part of real-life warfare, it's rare for both heroes and villains in a fictional setting to have this type of character.