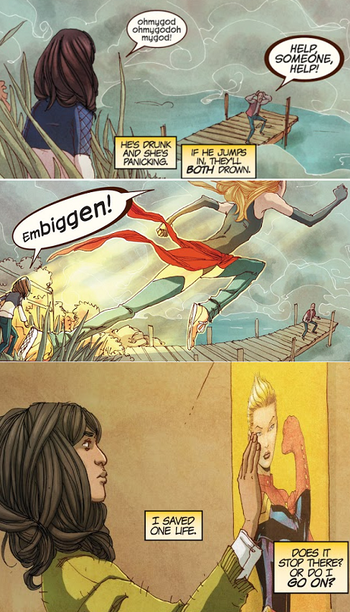 You never stop at one.
A newly super-powered person sees people in danger, and realizes that he can do something to save them. He rushes to the scene and performs the daring rescue. It usually happens at the close of the First Act of a Super Hero's origin story. In the beginning of the Second Act, and sometimes even the next scene, the hero will have donned his signature costume.
Advertisement:

The superhero version is a turning point, so it doesn't apply to rescue personnel performing their already chosen profession, like firefighters or police. Similarly, established superheroes doing this as a matter of course don't count. The heroic decision has to happen onscreen for it to be a part of this trope.

The danger can be any sort of natural disaster, accident or incident, but it's often a burning building; there will generally not be any archvillains yet. If it is a burning building, the magnitude of the primary hazards of conflagration

This is a subtrope of the Call to Adventure and Heroic Fire Rescue, and what often follows for the Super Heroes is an On Patrol Montage. If a character does this and is not a superhero, then they are showing their heroic nature via a Heroic Fire Rescue and belong there instead.