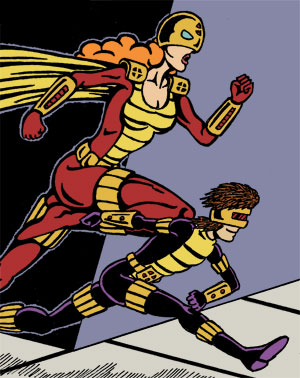 is a superhero comic created by J. Kevin Carrier. It began as a series of self-published minicomics in 1991, and began appearing as a webcomic in 2008.
Advertisement:

Schoolteacher Paula Carson and her daughter Jill are secretly Lady Spectra & Sparky, the costumed crimefighters of Apollo City. With their laser wristbands and other gadgets, they battle such supervillains as Repo-Beast, Black Sundae, and Skullduggery in Silver Age-style adventures.

The comic stopped updating in June 2019 with no explanation.