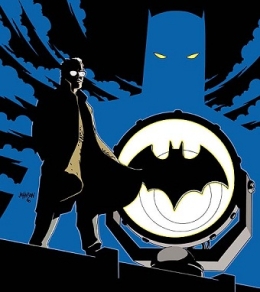 The Commissioner Gordon is a Reasonable Authority Figure who acts as an ally to the local Super Hero and provides the chief connection between the Super Hero and the official authorities. In other words, he's the one in charge of the Bat Signal. He's often a police detective or commissioner, but mayors, district attorneys, and other government officials can fill the role too. Whatever his job, he'll be trying to do good through legal and mundane means, while the hero's methods will be more exotic, and possibly (though not necessarily) illegal. Expect him to go Stepping Out for a Quick Cup of Coffee at some point.

If the Super Hero is loved and accepted by the community and the government, the relationship can be open and public. If the hero is in the "hated and feared" category, their relationship will probably be a source of political conflict for the Commissioner Gordon. He'll try to to keep it a secret or downplay it.

How helpful the character really is can vary. He could be a bumbler who would doom the city if he didn't have someone helping him. When played straight, he'll be either a valued teammate or a grudging ally. He'll make short work of most routine crime, but when a Super Villain or monster starts attacking the city, he knows it's time to pick up the red phone and call his partner. In a Crapsack World, the commissioner will often be an Internal Reformist or Defector from Decadence, and is frequently The Last DJ, a Knight in Sour Armor, or Anti-Nihilist.

A related trope appears in Private Detective series, where the detective always has a Friend on the Force. Compare also to the Inspector Lestrade, who brings seemingly unsolvable cases to the Great Detective, and The Brigadier, when it is applied to a senior officer in the military.