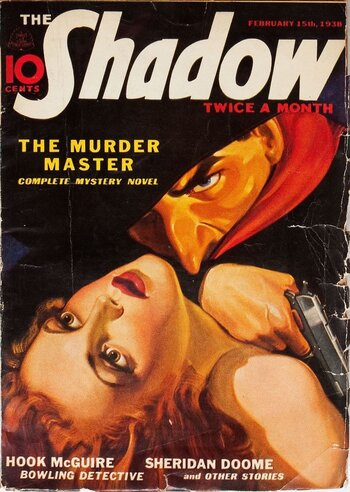 The Shadow began in 1930 as the host/narrator of a Radio Drama anthology series, introducing stories adapted from the Street & Smith Pulp Magazine Detective Story Magazine. Announcer Frank Readick buried himself in the role, chilling the airwaves with his haunting laughter. Intrigued, magazine buyers began asking for "that Shadow magazine." Not ones to pass up a profit opportunity, Street & Smith commissioned magician turned writer Walter Gibson to create the first story for their new magazine starring and named for the mysterious Shadow.

The character in the pulp fiction series was named Kent Allard, a World War I pilot who, after the war, dedicated himself to fighting crime. He dressed in a Coat, Hat, Mask outfit that may be the Trope Maker, and hunted criminals by night. Unlike Batman, who was obviously inspired by The Shadow, The Shadow used guns and wouldn't hesitate to shoot bad guys. He also used magic tricks to confuse villains, and was a master of disguise and concealment. He used a series of secret identities, the most common of which was Lamont Cranston, a Rich Idiot With No Day Job. (Unlike the radio show, where "Lamont Cranston" was actually The Shadow's real name, in the pulps Lamont Cranston was a separate person who sometimes helped The Shadow when both were in New York.) The pulp Shadow was a Chessmaster who used a small army of agents and informants to manipulate both criminals and the police, until the final confrontation, when he would take a direct hand.

First published in April 1931, and continuing for 325 novels (most but not all of which were written by Gibson), The Shadow Magazine was hugely influential in the creation of other pulp heroes, and eventually the Comic Book superheroes. The character became wildly popular. It inspired a radio program that in its turn became one of the most popular shows of the classic American Radio Drama era, running 17 years. There was also a comic book, and there have been multiple film adaptations, by far the most famous being a 1994 film starring Alec Baldwin as The Shadow.

Tropes found in "The Shadow":