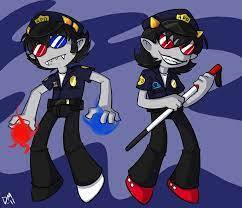 Troll Cops: The Radio Play is a radio adaption of the Homestuck fanfic AU Troll Cops. Unlike the AU, which has many different canons Depending on the Writer, the Radio Play has a consistent canon based around the canon of the most prolific Troll Cops author, Wigmund, and any story that doesn't conflict with it.

Currently on hiatus, but Word Of God also says that a podcast is in the works so anyone can listen to it anytime, anywhere. Here

is a list of all the stories that are part of the radio show's canon in (mostly) chronological order.