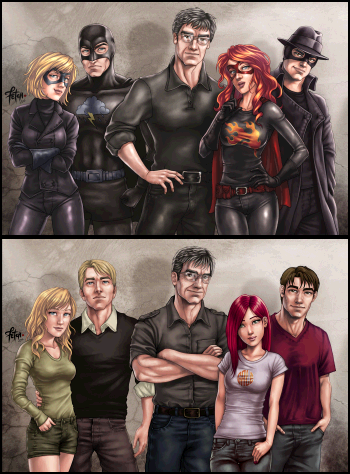 Relativity is about a team of crimefighters who operate in the fictional Gale City, Indiana. The series focuses on the people behind the masks, and how they juggle work, life, and relationships while donning a costume to fight crime at night. The characters have no superpowers and rely mainly on detectivework to solve crimes. Although it is written in prose form, the series is heavily influenced by comic books and television. The creators describe it as a "prose comicbook", and there is a lot of artwork on the site. It can be found here.

The original Black Torrent was Matthew Bruce, but after an attempt on his life, he was forced to go into hiding and change his name. Because of this, his son Michael believed himself to be an orphan, and formed close ties with his two best friends at school, Tony and Andy. As an adult, Michael is reunited with his father and takes over the Black Torrent role.

His best friend is Ravenswood Cadavre, a former private eye. Within the first few stories, Ravenswood and his fiancee, Melody, get married and begin running a coffee shop together. Their superhero personas are Overcast and Zephyra.

There's also Dark Flame, who joins the group early on. Unlike the others, her main focus is on rescuing children.

The name of the series, Relativity, has dual meaning. It's a play on the word "relative" since the main focus of the series is the family relationships between the characters. However, it also explores the complexities of family and how subjective the term "relative" can be, meaning that you can have genetic relatives who are disconnected and don't care about you, while you can have friends who are more like family than your flesh and blood.

Created by the writing team of Michelle and James Lehmann, the first story appeared on their website in late 2011, and it has been updating on a semi-regular basis ever since. All of the stories in the series can be read on-line or downloaded in eBook format for free.

Has nothing to do with the Theory of Relativity.