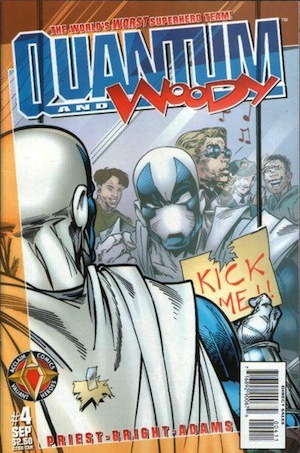 Quantum and Woody, the world's most dysfunctional superhero team. But they're not a couple.
Advertisement:

Quantum and Woody is a comic book series created by Christopher Priest and Mark D. Bright. it was originally published by Acclaim Comics, and later folded into the Valiant Comics label after Acclaim's buyout of the Valiant catalog.

The comic chronicles the super-heroic adventures of Eric Henderson and his longtime friend Woodrow "Woody" Van Chelton. Though their childhood friendship was abruptly terminated fifteen years ago, the two were bitterly reunited when their fathers were killed in a suspicious helicopter crash. Named as the primary suspects, the duo attempted to clear their names, but instead fell victim to an industrial accident. They survived the accident with the ability to fire energy blasts, but with a caveat: every 24 hours, they must slam together a pair of metal wristbands (not by themselves; against each other's, of course) to prevent themselves from discorporating into pure energy.

Genre Savvy Woody decides that — having survived an origin story — they must now become heroes. Despite some skepticism, Eric soon leaps at the opportunity to be The Cape; he augments his military fighting skills with an arsenal of gadgets, dresses up in a full-body costume (with cape), and takes the codename "Quantum". Rejecting costumes and code names as stupid, Woody simply charges in with a 9mm Beretta and a Zippo lighter.

Now the question is whether Quantum and Woody (and their pet goat Vincent) can clear through fifteen years of emotional baggage, repair their fractured friendship, and use their powers to help the helpless? Or will they simply strangle each other first?

Quantum And Woody quickly became an underground cult favorite for its unique blend of sharp writing, irreverent humor, social/racial commentary, and multifaceted characterization. Due to the closure of Acclaim, the series only ran for 22 issues and ended in the middle of a revival story arc.

Fast forward to the 2010's and the series is experiencing a second wind: a reboot of the series began in June 2013 with a new creative team

consisting of James Asmus (Gambit, Runaways) and Tom Fowler (Venom). The series lasted for 12 issues, and was then followed by two miniseries, Quantum and Woody Must Die! and Delinquents (the latter crossing over with Archer & Armstrong). Valiant also released Q2: The Return of Quantum and Woody, a miniseries by the original creators and set many years after the ending of the original series.

Priest has self-published a book on Amazon titled Klang!: A Writer's Commentary that details the creation of the original series, its cancellation, its later revival and also includes scripts for six unpublished issues.