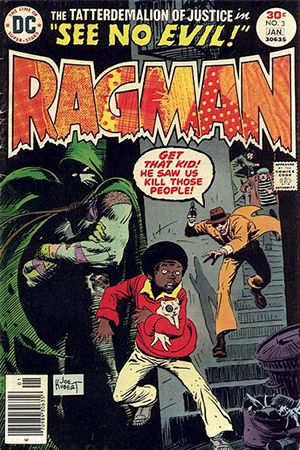 You keep talking ideology, Robin. The rest of us live in a very real world. In Gotham there are usually only choices between evil and lesser evil. While the gangs seek to protect what little is theirs, who is the real instigator of their violence? Who stands to gain the most[?]
—Ragman, Robin
Advertisement:

Ragman is a DC Comics character created by Robert Kanigher and Joe Kubert. He first appeared as the title character of his own series in 1976.

Rory Regan is Ragman, the latest in a long line of family members entrusted to wear the Suit of Souls and protect the Jewish community they are part of, and their community as a whole from those whose souls have been corrupted by their own evil actions. As a Gotham native Rory keeps plenty busy at home but has also found time to be part of several teams including Shadowpact and the Sentinels of Magic.

In his civilian life Rory runs a junkstore called Rags 'n Tatters which is another bit of inheritance from his father and is where he found the suit. He is entirely unaffiliated with Gotham's other patchwork hero Simon Dark.