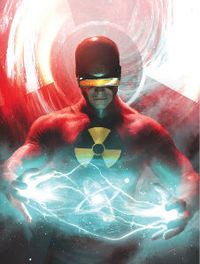 Doctor Solar is a comic book superhero originally published by Gold Key Comics starting in 1962. A physicist whose name was actually "Solar", Philip Solar was trapped in a nuclear reactor by saboteurs. He survived and found that he gained enormous power and could turn into and produce energy. He was created by Paul S. Newman and Matt Murphy.
Advertisement:

Solar held his own title from October, 1962 to April, 1969, for a total of 27 issues. The series was revived in the early 1980s, continuing the original numbering. Four issues appeared between April, 1981 and March, 1982. He had guest appearances in the Doctor Spektor series. But this was the extent of his use by the original publisher.

In the 1990s, Solar, followed by fellow Gold Key alumni Magnus Robot Fighter and later Turok, was licensed by Valiant Comics. Under Jim Shooter, Solar became the central superhero of the Valiant universe. Doctor Philip Seleski had read the Gold Key comic books as a child and his thoughts affected the reactor to copy the comic book character's origin. He wielded godlike power, re-created the universe during his origin, and was responsible for several Crisis Crossovers.

In 2010, Shooter restarted this title, as well as Turok and Magnus, Robot Fighter, for Dark Horse Comics, who licensed the characters directly from Gold Key using stories based on Gold Key elements (for instance, he's named Phil Solar again). The series quickly ended after a combination of unpopular art and Schedule Slip.

Doctor Solar (along with Magnus, Turok, and Doctor Spektor) has recently been revived again by Dynamite Comics.

Solar has examples of: