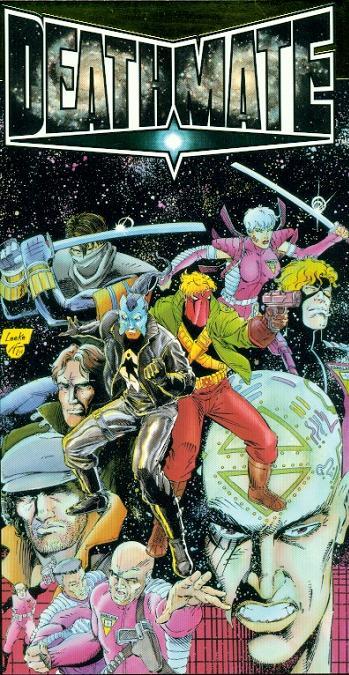 "Their love will end worlds!"
— Deathmate advertisement; it proved to be right in an ironic way.
Advertisement:

Deathmate was a 6-part comic book crossover between Valiant Comics and Image Comics, published from September 1993 to February 1994.

Here, ladies and gentlemen, is a tragic story. Once there were two friends who worked at two different comic companies. Steve Massarsky worked for Valiant Comics, and Jim Lee worked for Image Comics. The two came up with an idea: why not initiate an Intercontinuity Crossover? After all, it's The '90s and crossovers are all the rage!

So, having arranged the crossover, called Deathmate, each company gets to work. Designated by color rather than issue numbers (namely Yellow, Blue, Black, and Red) plus two book-end issues, "Deathmate Prologue" and "Deathmate Epilogue", the four main issues were written so they (in theory) could be read in any order. In practice, however, they were a disjointed and snarled mess, not at all helped by the Valiant side keeping a tight editorial leash, and the Image side letting the writers and artists do whatever they wanted.

The premise behind the crossover was simple: Solar: Man of the Atom and Wild CATs' Void met, had sex, and this "begins to unravel the strands of time, creating an Alternate Universe where Image and Valiant characters exist side by side".

However, Valiant's and Image's writers knew nothing about the other company's characters, resulting in a ton of Out of Character. This wasn't the worst problem plaguing the series, either: Valiant (as a byproduct of its unique real-time continuity system) was super serious about shipping schedules and deadlines, and produced all its contributions on time. Image, on the other hand, was notorious for its Schedule Slip, so its half was produced late. Particularly, Rob Liefeld produced his issue, Deathmate Red, a year late, and his contribution to the Valiant-published Prologue issue was completed only after Valiant editor-in-chief Bob Layton came to his house and refused to leave until it was done, inking it in a hotel room.

By the time the Image half actually came out, interest in it had dried up, but shop owners had pre-ordered massive numbers of issues when the cross-over had started, and were now left with mountains of unsellable comics. This, more than any other single event, contributed to the collapse of the comic industry in the '90s. Deathmate was also one of the events that lead to the fall of Valiant Comics, as it flooded the company with Image artists, and caused a fundamental shift in the way the company was run.

The advertisement for Deathmate said "Their love will end worlds!" While it was talking about Solar and Void, it could also be said to be true of Valiant and Image. This disastrous "pairing" did indeed destroy worlds: It helped destroy the world where the comic book industry makes $500 million per year. It destroyed the world where Valiant Comics so much as existed, much less was the third highest selling comic company. And it destroyed the world of small comic book shops, many of which went out of business.

Not ever to be confused with Death Note.

In 2016, a new take on the DeathMate storyline was confirmed to be in the works - one that should hopefully come out on time and avoid crippling the industry again. This turned out to be a misdirect to a new character named Deathmate in the pages of Valiant comic Bloodshot Reborn, with no relation to the previous storyline.