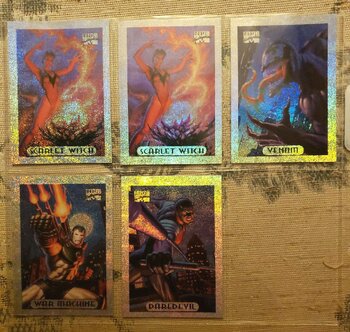 Not really much of an incentive for comic collecting when these "rare" collectibles were everywhere.
Hobbes: How will these be rare and valuable if every kid in America has five copies?
Calvin: We're all counting on the other guy's mom to throw them away.
—Calvin and Hobbes (March 1st, 1995

The great comics crash... of 1996. Actually, it lasted a number of years, from at least Deathmate (1993) to the failure of Marvel's Heroes World deal

(1997), but if you need a single year, 1996 is the best one, because that's when the dawning realization that things were about to go downhill started to hit the comic world.

The Crash happened alongside the emergence of The Dark Age of Comic Books, but it wasn't strictly caused by it. Instead, there were two main causes of the Crash: the "direct market"

and the collector boom.

The "direct market" was a way for comics publishers to distribute their comics directly to comic book shops. These shops were not covered by The Comics Code and could thus sell books that did not have Code approval. They also served as a convenient gathering place for fans of the medium to meet and discuss them. The direct market was also a big plus for publishers; instead of "stripping" and returning unsold copies for full credit, stores still had the chance to sell their extra copies by tossing them into the back-issue bin. Although direct-market comics distributors had existed since the foundation of Mile High Comics in 1971, the 1990s saw the two major direct-market distributors, Diamond and Capital City, drastically reduce their ordering requirements. This led to a vast number of "comics dealers" springing up overnight, most of them young, inexperienced, and undercapitalized. These actions caused the direct market to jump from 6% of total comic book sales in 1978 to 70% in 1992.

The collector boom, though, was probably the biggest factor given its drastic impact on the industry. Over time, early comics had become valuable, mostly because not a lot of them had survived. The possibility dawned on the industry that comics being released today could become really valuable in the future. The impact of the collector boom is often overstated for end-level collectors; the real driving force in this regard came from many of the aforementioned "dealers" who over-ordered in massive numbers for a demand that wasn't there even in the boom days. But the comic book industry soaked it up, and thus appeared several marketing tactics to appeal expressly to this collectors' market, like:

This was also the era of the superstar artist. Popular artists left Marvel and created Image Comics. Marvel then handed editorial control to the marketing department, which led to Onslaught and Heroes Reborn, where Marvel outsourced its comics for a year to popular artists' own studios. Sales boomed based on art, often ignoring writing.

But the boom was short-lived, as publishers ignored one basic economic fact: The old comics were selling for such high prices in the first place only because they were extremely rare. For example, the first appearance of Superman Action Comics #1 was certainly a significant moment in comics history, but there were also only about hundred or so copies of the original 1938 print run remaining at most — the rest had been thrown in the garbage, recycled through wartime paper rationing initiatives, or otherwise lost. Conversely, the new "collectibles" were being churned out by the truckload. Millions of people had bought comics like X-Men #1 in hope that it would become a rare collectible, but since there were millions of copies floating around, anyone who wanted to collect it could get it for a song. To make matters worse, a lot of the material that was trying to become collectible using these gimmicks was the kind of poorly written Liefeldian rubbish that few believed was worth collecting in the first place. Finally, the artists at Image Comics proved very prone to Schedule Slip; the Deathmate crossover, one of the most notorious cases of this, helped to kill Valiant Comics.

When the public and dealers realized this, the bottom fell out, and the market collapsed. Many of the smaller publishers went bust or were bought out (including Valiant Comics), and two-thirds of all direct market comic book stores went out of business.

1996 was the year that everyone saw the writing on the wall. It was the following year, 1997, that Marvel filed for bankruptcy, which dealt the industry a massive blow. The filing was partly for reasons unrelated to the Crash (then-owner Ron Perelman was a "corporate raider", having bought the company with junk bonds and dummy corporations and then ransacked it to line his own pockets), but many of Marvel's financial problems could be traced to the Crash. Marvel had attempted to muscle in on the direct market by purchasing mid-level distributor Heroes World, in an attempt to distribute their comics in-house. This led to a shootout between distributors that ended up destroying Capital City Publishing and left Diamond as the sole distributor for every other comic company. Heroes World bled money and had serious issues shipping issues out on time, which caused many stretched-thin comic stores to go under, further aggravating the industry's woes. In 1997, in the midst of bankruptcy hearings, Marvel finally gave up and sold the company to Diamond.

All of this also impacted the consumer base of the medium, which moved increasingly from the mainstream public to a smaller niche market of fans and collectors. There are two dominant stereotypes of the readers of this age, fair or otherwise. The first is the "comic book teenager", an insecure fan who hated any hint of "silliness" in his comics and demanded that they be "adult" and taken deathly seriously, even though the shocking content of said comics only implied immaturity. The second was the "collector", who obsessively and joylessly maintained his collection in pristine condition, with little or no interest in the actual content.

Comic book sales hit their lowest point in 2001, at about 67 million copies sold. However, other forces were already in play by then, including the rise of the trade paperback (which, sold in bookstores, nets more money for the companies than the actual comics these days). Dark Horse survived due to its licensed titles (particularly the Star Wars books), whereas Image survived thanks to the low overhead provided by its loose-knit structure. DC survived thanks to being firmly in place within the Time-Warner hierarchy, whereas Marvel got into its next big business — movies. Ironically, the movie deals that helped to save Marvel and turn it into a multimedia giant (and future Disney subsidiary) were inked by none other than the man who helped kill the company in the first place, Ronald Perelman. In addition, his attempts to get comic book stores to sell collectible Marvel-themed card sets meant a small card-game company out of Washington had a ready-made market for their upcoming smash hit.