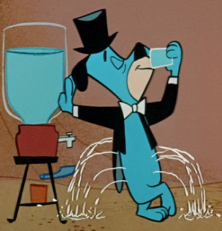 A character is subject to gunfire or sharp spikes, suffering no apparent injuries. But should he drink something or fall into water, the liquid will immediately pour out by small holes in his skin. Hilarity Ensues.
Advertisement:

A classic gag chiefly featured in animation. It has all the implications of terrible injuries, without all that massive bleeding and annoying death getting in the way of the humor. When it turns up in live action, it's usually in a slapstick comedy, bonus points if it involves the undead or immortal "victim".