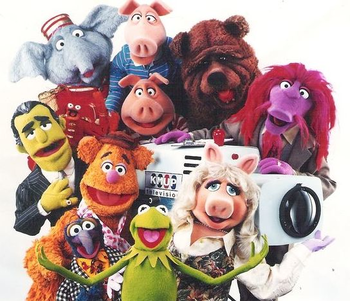 "If you're a human being, take a break from the race
Take a load off your feet, wipe the look off your face
We've got a lot to do, and we do it for you
Everybody take your place!"
Advertisement:

Muppets Tonight is a TV series featuring The Muppets that originally ran from 1996 to 1998, initially as part of ABC's TGIF block. (A Channel Hop to Disney Channel followed.) An update of the premise of The Muppet Show, it features the Muppets producing a television variety show with the help (or otherwise) of the episode's guest star. Kermit the Frog was replaced as host by Clifford, a catfish-esque "humanoid" first seen on The Jim Henson Hour, but retains his role as producer. Pigs In Space, a recurring sketch from The Muppet Show, returned as Deep Dish Nine.