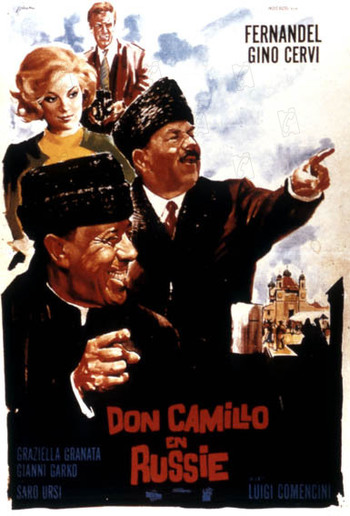 Don Camillo in Moscow (Italian: Il compagno Don Camillo; French: Don Camillo en Russie) is a 1965 Italian-French comedy film directed by Luigi Comencini, starring Fernandel and Gino Cervi. It is the fifth film of the Don Camillo franchise, the last of it to be filmed in black and white, and the last to star both Fernandel and Cervi. René Barjavel wrote the French dialogues.

Don Camillo (Fernandel) and Peppone (Cervi) do not agree about the Union of Soviet Socialist Republics. According to Peppone, it is a land of plenty and he decides to twin Brescello with a Soviet town. Camillo puts up a man and a woman who pretend to be refugees from the USSR and he uses them to discredit the twinning project, but they turn out to be impostors. Peppone and his communist comrades are invited to the country for the twinning ceremony. Camillo decides to go with them.